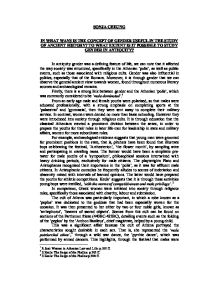 In what ways is the concept of gender useful in the study of ancient history? To what extent is it possible to study gender in antiquity?

SONJA CHEUNG IN WHAT WAYS IS THE CONCEPT OF GENDER USEFUL IN THE STUDY OF ANCIENT HISTORY? TO WHAT EXTENT IS IT POSSIBLE TO STUDY GENDER IN ANTIQUITY? In antiquity gender was a defining feature of life, we can note that it affected the way society was structured, specifically in the Athenian 'polis', as well as public events, such as those associated with religious cults. Gender was also influential in politics, especially that of the Romans. Moreover, it is through gender that we can observe the general ancient view towards women, found throughout numerous literary sources and archaeological remains. Firstly, there is a strong link between gender and the Athenian 'polis', which was commonly considered to be 'male dominated'.1 From an early age male and female youths were polarised, so that males were educated professionally, with a strong emphasis on completing sports at the 'palaestrai' and 'gymnasia', then they were sent away to complete their military service. In contrast, women were denied no more than basic schooling. However they were introduced into society through religious cults. It is through education that the classical Athenians erected a prominent division between the sexes, in order to prepare the youths for their roles in later life-men for leadership in state and military affairs, women for more subordinate roles. For example, archaeological evidence suggests that young men were groomed for prominent positions in the state, that is, pitchers have been found that illustrate boys celebrating the festival, 'Anthesterion', 'the flower month', by sampling wine and participating in crawling races. The former would have been a simplistic pre-taster for male youths of a 'symposium', philosophical sessions intertwined with heavy drinking periods, exclusively for male citizens. The playwrights Plato and Aristophanes recognised their importance in the 'polis', as it was for affluent male citizens. In Aristophanic comedies he frequently alludes to scenes of inebriation and obscenity mixed with intervals of learned opinions. ...read more.

We first see Odysseus on Calypso's island, weeping in despair to return home to Ithaca.9 Likewise, Homer frequently alludes to Odysseus's wife, Penelope, crying. For instance, we observe her crying for her lost husband when she retrieves his bow for the suitors' competition.10 Both of the genders display similar characteristics, which Homer's audience obviously found acceptable in men. This emphasises that the gap between the genders widened with the progression of society and the founding of the structure of the 'polis'. A further example that illustrates this point can come from the medium of tragedy, as the perception of male literary figures had conformed to the opinions of the 'polis'. That is, male characters are portrayed as more restrained towards their emotions, in Aeschylus' 'Agamemnon', the male king shows a considerable deal of restraint when Clytaemnestra offers him the sacred carpets to walk on. He states: 'This-you treat me like a woman...give me the tributes of a man...'11 Agamemnon displays his lack of excitement towards the frivolity of walking on 'nice' tapestries that obviously would have appealed to a woman's nature. In the Homeric era, heroes appreciated niceties-Odysseus is bathed in perfume when he gets to Phaecia, there are constant allusions to Paris preening and primping himself and we are frequently reminded of his good looks. This illustrates the progression of the male status from the Heroic age to classical Athens. Briefly, we can note that Homeric heroes took an active grieving role in funerals. Achilles pours grimy dust on his face and beasts his breast, accompanied by his handmaidens; then Homer states that: 'Antilochus mourned with him, letting the tears fall...'12 Furthermore, this reiterates the different characteristics found in the male persona of the heroic age, rather than the age of the 'polis'. However, we should also observe that the Homeric heroes were not completely without restraint, they just depicted less moderation than would have been acceptable for later Greeks. ...read more.

For example, he describes the 'whore empress' coming home from the brothel to the Imperial palace.21 Furthermore, his female persona attacks males for preferring homosexuality and states that overseas people are laughing at their effeminacy.22 In contrast, he frequently extols the old virtues of chastity in women and praises the good old days, when men worked in fields and completed other masculine tasks23. Thus highlighting the change of roles in gender, on account of a changing society. In conclusion, we can argue that the concept of gender is extremely important when studying ancient history, as it played a significant role in defining the structure of society. The progression of society, both Greek and Roman, can also be marked by the changing perceptions of each gender, found in abundant literary sources and archaeological material. These sources of evidence make it possible to study gender, however we should also take into account, when using literature as evidence, some external influences. For example, when consulting tragedy or comedy. For the perception of Greek women, we should note that the playwrights exaggerated the characteristics of figures, for dramatic effects. That is to say, in the 'polis', not all Greek women were alcoholics with a sex addiction, as portrayed in Aristophanic comedies. Likewise, from Juvenal's satires we cannot assume that all Roman women were promiscuous, due to the degeneration of their social structure. The ancient writers were assuming the 'worst-case-scenarios', highlighting what would happen without a social structure in society. However, there is truth behind these pieces of literature, as the authors had to base their work on realism, so that their audiences could relate to their work. Furthermore, we should take into consideration the genre that the author was writing for, for example, Tacitus was considered to be a 'silver age' writer, thus his writing would have portrayed characteristics of that type. Thus, his work is macabre and sombre; therefore his portrayals of his characters would reflect that style. Likewise, archaeological evidence should be considered with care, as depictions on pots and vases are left to our own personal interpretation. ...read more.