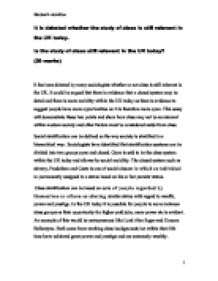 Is the study of class still relevant in the UK today?

It is debated whether the study of class is still relevant in the UK today. Is the study of class still relevant in the UK today? (30 marks) It has been debated by many sociologists whether or not class is still relevant in the UK. It could be argued that there is evidence that a closed system may be dated and there is more mobility within the UK today as there is evidence to suggest people have more opportunities so it is therefore more open. This essay will demonstrate these two points and show how class may not be as relevant within modern society and other factors must be considered aside from class. Social stratification can be defined as the way society is stratified in a hierarchical way. Sociologists have identified that stratification systems can be divided into two groups open and closed. Open is said to be the class system within the UK today and allows for social mobility. The closed system such as slavery, Feudalism and Caste is one of social closure in which an individual is permanently assigned to a status based on his or her parents' status. Class stratification can be based on sets of people regarded by themselves or others as sharing similar status with regard to wealth, power and prestige. ...read more.

Glass (1954) supports the functionalist's theory of stratification. His study Social Mobility in Britain was the first sociological study on mobility in Britain and studied inter-generational mobility of men from different generations. ~It identified high levels of intergenerational mobility with 2/3 of men interviewed in different status groups to their fathers. It found that 1/3 had experienced upward mobility, 1/3 downward mobility and 1/3 had remained in the same category as their fathers. Glass found that class status of the family directly affected life chances. Although this study, on the surface shows social mobility within society, if it is studied deeper it proves that mobility may be limited and gives evidence of social closure. The higher the occupational status of the father the more likely the son was of achieving a high status position. In the high status categories there was a significant degree of self recruitment. 45% of the members in category 1 in the Registrar General Scale were the sons of fathers also in category 1. This is 13 times greater than what would be expected by chance. If parental occupation had no influence on a person's status then you would expect 3.5% of the sons in category 1 to have fathers in the same position. ...read more.

It studied males between the ages of 20 and 64 and it found that there was a higher rate of long range mobility than in 1949. This mobility was more upward. 2/3 of the sons of unskilled/ semi skilled workers were in manual occupations. Relative mobility chances varied significantly between the classes. For example 45.7% of sons with class 1 fathers ended up in this class compared to only 7.1% of those men whose fathers were in class 7. The study also found that unemployment had effected all the classes but most noticeably within the working class. The findings in this study would suggest initially that mobility has increased in the UK but in 1972 class boundaries were still evident and it wasn't as open or meritocratic as suggested. Goldthorpe and Glass' studies cannot be compared directly as different scales were used to measure stratification. This makes the results unreliable. The sample used was also biased as it did not include women. To conclude, class may not be as relevant in the UK today as some theorist may suggest although it still plays a part, mainly being subjectively, how people see their own position within society. Other factors must be considered in today's society that may not have been so relevant in the last century, such as party and status. ?? ?? ?? ?? Elizabeth Hamilton 1 ...read more.