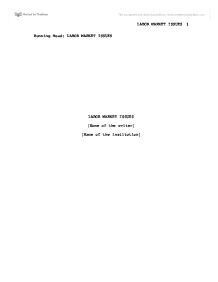 material share of some cost category that is relevant when employment decisions are made (or that there is ? different, but strong, reason to substitute against social workers). (Christopher, 1985) UNION AND WAGES Union Works All manner of working people today belong to unions, whether employed or unemployed, from doctors to trash collectors, schoolteachers to secretaries, pilots to printers. Unions act as the voice of the workers. The sole existence of any union is to benefit its workers. Many people in the work force today belong to some form of ? union. ? union, is therefore ? group of workers who join together to make their working' lives better. Sometimes unions are referred to as associations, federations, brotherhoods, societies, alliances, leagues or simply workers. (George, 1994) The Union's interests are financial and ethical. The Union benefits by maintaining ? large dues paying employee base to fund the activities of the Union. The Union must show its members that the Union is protecting the best interest of its members. The Union's has ? right and ethical responsibility to its members to act in the interest of its members without financial gain. (Nelson, 1982) Union strength and Weakness Workers individually are powerless against the boss. Alone they are at the complete mercy of an employer who will exploit them to the hilt and put their health and their lives at risk to do so. It is their organization in trade unions, their unity the power of the collective that enables workers to withdraw their labor that gives workers the strength to defend their rights. (Katherine, 1994) The negative side union is the fact that individual needs are not taken into consideration. An individual worker may not want to go to strike; however, if the union decides to go to strike, that individual is forced to stop working and earn wage. With union, monthly wage, benefits, working hours are set on the negotiation table. ...read more.

They may also run errands and walk the family dog. For many domestic workers, ? large part of their job is taking care of the children. If there are elderly or disabled people in the household, domestic workers may care for them as well. (Charles, 1990) Liberal immigration policy Liberal immigration policy brought hundreds of thousands of settlers to the western. It reduced postal rates, promoted the building of railroads needed for national expansion, and appointed ? commission to regulate railroad rates. After 15 years in office his government was defeated, presumably on the issue of reciprocal trade with the United States. Prior to World War I, Laurier tried forcefully to support the formation of ? Canadian navy. His own Liberal party defeated this measure, however, and Canada entered the war without ? fleet of its own. (Howard, 1987) Conclusion The economy's income is distributed in the markets for the factors of production. The three most important factors of production are labor, land, and capital. The demand for ? factor, such as labor, is ? derived demand that comes from firms that use the factors to produce goods and services. Competitive, profit-maximizing firms hire each factor up to the point at which the value of the marginal product of the factor equals its price. The supply of labor arises from individuals' tradeoff between work and leisure. An upward-sloping labor supply curve means that people respond to an increase in the wage by enjoying less leisure and working more hours. The price paid to each factor adjusts to balance the supply and demand for that factor. Because factor demand reflects the value of the marginal product of that factor, in equilibrium each factor is compensated according to its marginal contribution to the production of goods and services. Because factors of production are used together, the marginal product of any one factor depends on the quantities of all factors that are available. As ? result, ? change in the supply of one factor alters the equilibrium earnings of all the factors. ...read more.