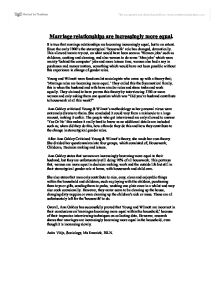 Marriage relationships are increasingly more equal. It is true that marriage relationships are becoming increasingly equal, but to an extent. Since the early 1900's the stereotypical 'housewife' role has changed, dramatically. This allowed men to try out, on what would have been seen as 'Women jobs' such as childcare, cooking and cleaning, and also women to do some 'Men jobs' which were mainly 'behind the computer' jobs and more leisure time, women also had a say in purchases and money matters, something which would have not been possible without this experience in change of gender roles. ...read more.

Ann Oakley criticised Young & Wilmot's methodology as her personal views were extremely diverse to theirs. She concluded it could vary from a miniscule to a large amount, making it unfair. The people who get interviewed are only allowed to answer 'Yes Or No' this makes it really hard to know as no additional details are included such as; when did they do this, how often do they do this and how they contribute to the change in stereotypical gender roles. After Ann Oakley Criticised Young & Wilmot's theory, she made her own theory. ...read more.

However, they never seem to be cleaning up the house, changing dirty nappies or even cleaning up the children's sick or mess. These are all unfortunately left for the 'housewife' to do. Overall, Ann Oakley has successfully proved that Young and Wilmott are incorrect in their conclusions on 'marriages becoming more equal within the household,' because of their imprecise interviewing techniques on collecting data. However, research shows that marriages are increasingly becoming more equal in the household, even though it is increasing slowly. Anita Vitija, Sociology, Ms Emerick, 10LN. ...read more.