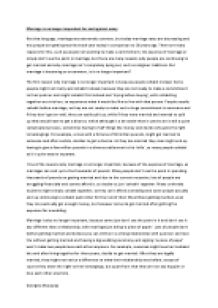 Marriage is no longer important. Evaluate the arguments for and against

﻿Marriage is no longer important for and against essay Not that long ago, marriage was extremely common, but today marriage rates are decreasing and less people are getting married each year today in comparison to 30 years ago. There are many reasons for this, such as people not wanting to make a commitment, the expense of marriage or simply don?t see the point in marriage, but there are many reasons why people are continuing to get married and why marriage isn?t completely dying out, such as religious traditions. But marriage is becoming so uncommon, is it no longer important? The first reason why marriage is no longer important is because people cohabit instead. Some people might not marry and cohabit instead, because they are not ready to make a commitment to their partner and might cohabit first instead and ?trying before buying?, with cohabiting together as a trial run, to experience what it would be like to live with that person. People usually cohabit before marriage, as they are not ready to make such a huge commitment to someone and if they don?t get on well, they can easily split up, while if they were married and wanted to split up they would have to get a divorce, which although is a lot easier than it used to be is still a quite complicated process, sometimes having to half things like money and decide who gets the right to belongings. ...read more.

Many people don?t really see marriage as that important anymore and instead of living in an ?empty shell marriage?, which is when a couple remain legally married even though it is technically over, in the eyes of the husband and wife, they simply get divorced, as we seem to have a lot more freedom now. However marriage is still important to some people. One of the reasons it is still important is due to people?s religious views and cultural traditions. Many Indians and Pakistanis, will marry as it is their tradition to get married at young age. They usually have low rates of cohabitation as they see marriage quite important within their culture and follow their traditions, sometimes having arranged marriages. Many Christians will also get married, maybe because they want to have children and only believe in having a children within a marriage due to the Bible and some Christians believe getting married symbolises your love for Jesus and God as marriage is what God teaches in the Bible. Because of ?English traditions?, some people still continue get married, as although it is dying out it is still a tradition to get married and due to things like governments encouraging divorce, giving things like tax allowance for married couples. It?s also important, because they believe a married relationship is the best environment to bring children up in. ...read more.

Marriage is no longer important, because so many people are beginning to get divorced. Today divorce is a lot more socially acceptable, with lots of media influence and more benefits for single parents and also the fact it is a lot easier. Many people don?t really see marriage as that important anymore and instead of living in an ?empty shell marriage?, which is when a couple remain legally married even though it is technically over, in the eyes of the husband and wife, they simply get divorced, as we seem to have a lot more freedom now. Overall, I think marriage is no longer important as marriage rates are continually decreasing, with increasing amounts of cohabitation, due to things like expenses of weddings and the commitment that has to be made and many people simply don?t bother going to the effort of organising a wedding, as they don?t see the point, unlike a few decade ago when it was the norm to get married. However marriage is important to some people, as many people are continuing to get married due their religion or their cultural traditions and due to the current recession, because of the financial support that it offers. So although marriage is no longer as important as it used to be, I think getting married will never ?die? out. Georgina Macaulay ...read more.

An interesting piece of work looking at the pros and cons of marriage. Relevant examples for both sides of the argument were given. The writer could also have mentioned the relaxation of the laws governing divorce and the reduction in the length of time one has to have been married before petitioning for divorce. Be careful of wording your work in such a way that it would appear that assumptions are being made (see page 2-3).
Proof-read carefully to eliminate grammatical errors. Having said that the writing style is good overall.
4/5