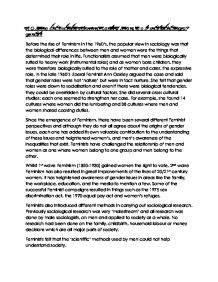 outline and evaluate feminist contributions to our understanding of gender

E) Outline and evaluate Feminist contributions to our understanding of gender. Before the rise of Feminism in the 1960's, the popular view in sociology was that the biological differences between men and women were the things that determined their role in life. Functionalists assumed that men were biologically suited to heavy work (instrumental roles) and as women bore children, they were therefore biologically suited to the role of mother and carer, the expressive role. In the late 1960's Liberal Feminist Ann Oakley argued the case and said that gender roles were not 'nature' but were in fact nurture. She felt that gender roles were down to socialisation and even if there were biological tendencies, they could be overridden by cultural factors. She did several cross cultural studies; each one seemed to strengthen her case. For example, she found 14 cultures where women did the lumbering and 38 cultures where men and women shared cooking duties. Since the emergence of Feminism, there have been several different Feminist perspectives and although they do not all agree about the origins of gender issues, each one has added its own valuable contribution to the understanding of these issues and heightened women's, and men's awareness of the inequalities that exist. ...read more.

Liberal Feminists believed in 'self ownership', and felt that women should have control over their own bodies. Their campaigning resulted in improvements in fertility control. Betty Friedens N.O.W (national organisation of women) campaigners also got results for women. They had excellent media contacts and bombarded Washington with telegrams about s*x discrimination, picketed the EEOC (equal opportunity employment commission) and filed complaints against the N.Y Times for its s*x segregation job ads. This resulted in the US s*x Discrimination Act and the Equal Pay Act though the s*x Discrimination Act fell in 1982. The Liberal Feminist perspective was useful for highlighting inequalities at work and domestic labour but it doesn't explain why socialisation leads men to be dominant and women to be oppressed. It also overestimated the role of education, legislation and male resistance to giving up their power. It came under fire from black Feminists too who felt that different cultures and classes were not being taken into account. They felt that white women's experiences were far different to their own. For example, a white woman might be refused an abortion; black women were likely to be pressured into them. ...read more.

to their jobs, fails to explain how women now officially make up more than half of the current labour force, and if women are cheaper to employ, why aren't men staying at home while the women go out to work. Marxist Feminists say that if capitalism was abolished, gender inequality would disappear. Sylvia Walby says Marxist Feminism doesn't explain exploitation of women in non-capitalist societies, and they are criticised for overlooking patriarchy as being influential and for ignoring sexuality, violence and culture in the inequalities of women. Black Feminists also criticise it for ignoring race and ethnicity. The most balanced view to date seems to be that of the Dual/Triple system Feminists who take a piece of all the other perspectives. They believe that capitalism, patriarchy and r****m all influence women's lives. This is a useful attempt at producing a more sophisticated explanation of gender inequalities but Postmodernist Feminists like Michelle Barrat and Anne Phiillips (1992) argue that inequalities in society have now broken down and Catherine Hakim (1996 denies that there is discrimination against women at work. She states that women are les committed to employment tan men and that a woman's inferior place at work is down to her own choice to put her family before employment. ...read more.

The body of the essay is great and shows excellent knowledge and understanding. However, there is probably not enough evaluation - a key critic would be that the essay asks if we understand gender, yet feminists seem to focus mostly on women at the expense of men. The essay writer would also benefit from practising writing introductions and conclusions.