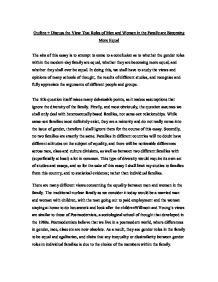 Outline + Discuss the View That Roles of Men and Women in the Family are Becoming More Equal The aim of this essay is to attempt to come to a conclusion as to whether the gender roles within the modern-day family are equal, whether they are becoming more equal, and whether they shall ever be equal. In doing this, we shall have to study the views and opinions of many schools of thought, the results of different studies, and recognise and fully appreciate the arguments of different people and groups. The title question itself raises many debateable points, as it makes assumptions that ignore the diversity of the family. Firstly, and most obviously, the question assumes we shall only deal with heterosexually based families, not same-s*x relationships. While same-s*x families most definitely exist, they are a minority and do not really come into the issue of gender, therefore I shall ignore them for the course of this essay. Secondly, no two families are exactly the same. Families in different countries will no doubt have different attitudes on the subject of equality, and there will be noticeable differences across race, class and culture divisions, as well as between two different families with (superficially at least) ...read more.

are much more often 'shared' than the male-dominated ones (Checking Car Oil, Plastering) Burghes (1997) argues against Oakley's dismissal of male childcare, stating that more fathers are taking an active role in the emotional development and support of their children. Marxists argue that the traditional nuclear family was merely a way for the capitalist class to control and exploit the proletariat through ideology. Therefore, Marxist-Feminists believe in a 'patriarchal ideology', in which girls are socialised into a male-led world to accept their role as housewives, and make marriage and family their main goal. In turn, this will benefit the capitalist society by keeping the status quo, and creating a new generation of similarly socialised male workers and female housewives. Marxist-Feminists believe this patriarchy occurs at all levels of society, from making girls wear skirts to advertising dolls on television, and that to truly achieve gender equality we must dispense with socialising our children into gender roles. People often dismiss this view, claiming that gaining equality should not mean compromising identity, and many other feminists believe that retaining their femininity is as important a part of the struggle for equality as gaining equal rights. The New Right believe that the nuclear family is the ideal family structure, and that Britain went through a 'Golden Age' during the 1950s. ...read more.

In truth, it seems to me that the real nature of gender roles within the family is somewhere between all these points of view. I believe that as we currently stand, gender roles are equal, but not egalitarian. More males share more of the housework and childcare than ever, while more females are pursuing careers and learning what were traditionally 'male' skills (eg DIY, repair, vehicle maintenance etc). People tend to still do jobs that were traditionally considered 'right' for their s*x, and there are most definitely still differences between the genders, but these boundaries are being pushed every day, and more and more families are sharing more jobs and decisions. I think we must remember that social attitudes take more time to change than social actions, and we must recognise that change is occurring. Since the 1970s, when Ann Oakley wrote her books on housework, we have seen the rise of the 'new man' and 'house-husbands'. Meanwhile, more and more women are proving Fox's and Parsons' theories of biologically determined roles to be wrong. Not all families will follow the statistics; there will always be a few male-dominated households, just as there are now 'role-reversal' families. And families will always differ slightly from each other. But within a few generations, I believe that Willmott and Young's vision of an egalitarian family will become our view of the majority of families, as we're halfway there already. ...read more.

This question has been answered very well for a GCSE candidate. The writer evidently has a sound understanding which is obvious by the multiple references to broad sociological theory, and key sociologists in this particular field of gender roles (Oakley, ...

This question has been answered very well for a GCSE candidate. The writer evidently has a sound understanding which is obvious by the multiple references to broad sociological theory, and key sociologists in this particular field of gender roles (Oakley, Parsons). The writer has clearly outlined and discussed familial roles, so the answer does not lack focus whatsoever. The essay is well structured, with a good introduction (Ã¢â‚¬Å“the aim of this essay isÃ¢â‚¬Â¦Ã¢â‚¬Â) and conclusion (Ã¢â‚¬Å“I have attempted to fully understand all these points of view, and come to a fair conclusionÃ¢â‚¬Â), which makes it clear and easy to read.

The writer explains a variety of sociological theories in detail, which shows the great extent of their knowledge. Functionalism, Marxism, Postmodernism, New Right and Marxist and liberal feminist perspectives are all well explained. The fact that they distinguish between different types of feminism is extremely impressive at GCSE level. Marxist and feminist key terms are used well in context, Ã¢â‚¬Å“proletariatÃ¢â‚¬Â and Ã¢â‚¬Å“patriarchal ideologiesÃ¢â‚¬Â, as well as Functionalist key concepts such as the Ã¢â‚¬Å“instrumentalÃ¢â‚¬Â role and Ã¢â‚¬Å“expressiveÃ¢â‚¬Â role. This clearly shows that they have an impressive knowledge of sociology as a whole Ã¢â‚¬â€œ and are able to directly relate these key sociological concepts to the question set.
The writer has made reference to cross-cultural differences, and also differences within western society itself. Although they have chosen not to expand on these ideas further Ã¢â‚¬â€œ Ã¢â‚¬Å“this type of diversity would require its own set of studies and essays, and so for the sake of this essay I shall limit my studies to families from this countryÃ¢â‚¬Â - they have successfully demonstrated that they are actually aware of these contemporary issues. This shows they recognise that other societies and cultures have different norms and values to what we do in the UK. Most candidates would dismiss any ideas that they do not need to fully write about, so this candidate should be credited for their acknowledgements. To improve this cross-cultural point, however, I feel the writer could use the terms Ã¢â‚¬Å“norms and valuesÃ¢â‚¬Â as this is essentially the reason why we have this idea or construction of gender roles. It would just explicitly show their overall understanding of sociology. In addition, the use of statistical evidence shows that the writer can back up the sociological points they are making more objectively.
The use of not only a bibliography, but also a webliography shows that the writer has thought very carefully about their essay, and has therefore documented where their evidence has come from for future reference (obviously in examination conditions this isnÃ¢â‚¬â„¢t necessary). It shows the examiner that they have an awareness of other peopleÃ¢â‚¬â„¢s work Ã¢â‚¬â€œ they are not just copying or plagiarising. Instead they are using other peopleÃ¢â‚¬â„¢s work, in their essay, to come to an informed conclusion. Providing these increases the professionalism of the essay.

The quality of writing is of a fairly high standard. Spelling is mostly accurate, although one mistake is Ã¢â‚¬Å“debateableÃ¢â‚¬Â as it is spelled Ã¢â‚¬Å“debatableÃ¢â‚¬Â. The use of varied punctuation is good and also effective in demonstrating that the writer is aware of sociological key terms. This is because the essay uses quotation marks to show that a sociologist has developed a concept, for example Ã¢â‚¬Å“double shiftÃ¢â‚¬Â (Ann Oakley). The use of an asterisk in order to source the table containing gendered domestic divisions of labour is also professional and useful. But the writer does use capital letters where it isnÃ¢â‚¬â„¢t necessary, Ã¢â‚¬Å“Tidying up, Cooking, Bathing childrenÃ¢â‚¬Â, as it is in the middle of a sentence. Alternatively the writer also dismisses necessary capital letters on occasion Ã¢â‚¬â€œ Ã¢â‚¬Å“new rightÃ¢â‚¬Â Ã¢â‚¬â€œ as this is a political field of sociology, it does require them.