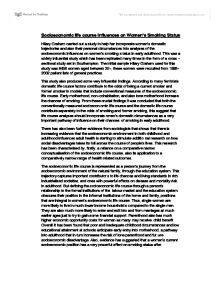 Socioeconomic life course influences on Women's Smoking Status Hilary Graham carried out a study to help her incorporate women's domestic trajectories and also their personal circumstances into analyses of the socioeconomic influences on women's smoking status in early adulthood. This was a widely influential study which has been replicated many times in the form of a cross-sectional study set in Southampton. The initial sample Hilary Graham used for this study was 8438 women aged between 25-, these women were recruited from 1998-2002 patient lists of general practices. This study also produced some very influential findings. According to many feminists domestic life course factors contribute to the odds of being a current smoker and former smoker in models that include conventional measures of the socioeconomic life course. ...read more.

There has also been further evidence from sociologists that shows that there is increasing evidence that the socioeconomic environment in both childhood and adulthood influences adult health is starting to stimulate additional research on how social disadvantages takes its toll across the course of people's lives. This research has been characterised by, firstly, a reliance on a comparative narrow conceptualisation of the socioeconomic life course, also its application to a comparatively narrow range of health related outcomes. The socioeconomic life course is represented as a person's journey from the socioeconomic environment of the natural family, through the education system. ...read more.

They are also much more likely to enter and exit into and from marriages at much earlier ages just to try to gain some financial support. Parenthood also has much higher economic opportunity costs for women as many may receive child benefit. Overall it has been found that poor and inadequate childhood circumstances and low educational attainment at schools anticipate early entry into motherhood, a pathway into adulthood that in turn increases the risk of lone parenthood and future socioeconomic disadvantage. Also, evidence has suggested that a women's current socioeconomic position has a very powerful effect on smoking status after adjustment for childhood circumstances. Childhood effects have also been found to also create further health problems for women such as depression and many psychological problems. ...read more.