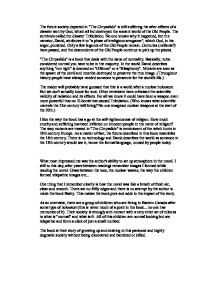 The future society depicted in "The Chrysalids" is still suffering the after-effects of a disaster sent by God, which all but destroyed the ancient world of the Old People. The survivors called the disaster Tribulation. No one knows why it happened, but the narrator, David, attributes it to "a phase of irreligious arrogance", which God, in his anger, punished. Only a few legends of the Old People remain. Centuries (millenia?) have passed, and the descendents of the Old People continue to pick up the pieces. "The Chrysalids" is a book that deals with the issue of normality. Basically, to be considered normal you have to be in the majority. In the world David describes anything "not right" is deemed an "Offence" or a "Blasphemy". Mutants are seen as the spawn of the devil and must be destroyed to preserve the true image. (Throughout history people have always needed someone to persecute for the world's ills.) The reader will probably have guessed that this is a world after a nuclear holocaust. But we don't actually know for sure. Other reviewers have criticised the scientific validity of radiation and its effects. For all we know it could have been a weapon even more powerful than an H-b**b that caused Tribulation. (Who knows what scientific marvels the 21st century will bring? No one imagined nuclear weapons at the start of the 20th.) I like the way the book has a go at the self-righteousness of religion. How much cruelty and suffering has been inflicted on innocent people in the name of religion? The way mutants are treated in "The Chrysalids" is reminiscent of the witch hunts in 18th century Europe. As a matter of fact, the future described in this book resembles the 18th century. There is no technology and David describes the world as someone in the 18th century would see it, hence the formal language, unused by people today. What most impressed me was the author's ability to set up atmosphere in the novel. ...read more.

have lived, is just a small part of the whole world - of the world destroyed by the nuclear disaster in the past. Not all the world has been destroyed, but a lot. It was the case, why such strange creatures and the plants they could see everywhere. A part of civilization has begun from the begin, they created the laws, they has own religion - this part of the world our friends know very well... But it is not all - a part of the people, which survived on the north of the planet, created a new civilization. They have continued only the way of living they did before, but more peacefully. David, Petra and Rosalind are here, at most amazing place they have ever seen. A modern city, light houses, travel... All the people around use the mental communication as an ordinary thing, they have been living in different way. Petra likes everything, David and Rosalind are happy, that they are safe, they can be together, that they need not to afraid of them lifes. They are living in the better world now. Is it the best world ? I, like most other reviewers of this book, read this book for my grade ten English class. I did not dislike the book; it was very well written and once I started reading, I found that I could not stop. However, both the ending and the characterization left much to be desired. But my real criticism was not with the book, but with the way people interpret it. Many students in my class believed it said that religion, especially Christianity, was wrong. I could not disagree more. What the people of Waknuk practiced was not Christianity, but something that was almost a cult. When the Fringes man talks to David about the true image, I get the impression that Wyndham was aware of this as well. ...read more.

This is a very interesting and well written story. And even though it's written in the typical austere English style, it deserves the label, "classic." It appears people still do not understand what the author is trying to say in this novel. It is not a "mutant vs human" struggle but a questioning of the meaning of the word 'human'. Is it the physical form or how one thinks that defines what a human is? That said, this is excellently written and a very satisfying story. This is the kind of science fiction I like. Not the kind with big space battles, etc., but a _human_ story. The style it is written in is excellent (the style of writing is often almost more important than the story). I first read this book in grade ten - and hated it! I re-read it a few years later, and loved it. I would suggest that anyone forced to read it in high school should give it another try, if they hated it. Being forced to read this book and write about it and discuss it destroys any enjoyment (at least it did for me). Give it another shot. I am not a big science fiction fan, but this story was very good. I really felt for the characters. I was saddened when certain characters died. I didn't want the story to end. This is a great book. I have just, this afternoon, finished readind it for school. And I can say this is one of a few great books that I have ever read. There are only two really. (Good Ones that is. Not ones that I have read.) If you are into science fiction, or even if you are not this is the book for you. No huge space battles, no complex things like what they mumble about on Star Trek nothing but a great read. ...read more.