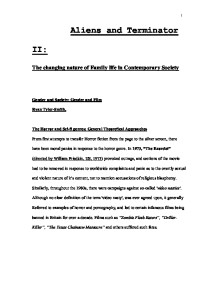 Aliens and Terminator II: The changing nature of Family life in Contemporary Society Gender and Society: Gender and Film Ryan Tyler-Smith. The Horror and Sci-fi genres: General Theoretical Approaches From first attempts to transfer Horror fiction from the page to the silver screen, there have been moral panics in response to the horror genre. In 1973, "The Exorcist" (directed by William Friedkin, US, 1973) provoked outrage, and sections of the movie had to be removed in response to worldwide complaints and panic as to the overtly s****l and violent nature of it's content, not to mention accusations of religious blasphemy. Similarly, throughout the 1980s, there were campaigns against so-called 'video nasties'. Although no clear definition of the term 'video nasty', was ever agreed upon, it generally Referred to examples of horror and p*********y, and led to certain infamous films being banned in Britain for over a decade. Films such as "Zombie Flesh Eaters", "Driller-Killer", "The Texas Chainsaw Massacre" and others suffered such fates. Due to actions such as this, both the Genres of Horror and p*********y have suffered similar fates; the cultural tag. These tags have led to a common mindset; that these industries are 'sick' or 'perverted' forms, capable of contaminating the minds of their audience is, and thus wider society. This mindset has created problems. Not only has it been used to support censoring legislation, but also it has prevented serious investigation of the forms or effects of these genres for a long time, due to their presumed negativity. However, this paper will attempt to correct this mistake, by looking at two particular classics of the newest Genre hybrid - The horror Sci-Fi mix. Whilst Aliens (Director James Cameron, US, 1986) and Terminator II (Director James Cameron, US, 1991) share many metaphors and symbols, of which I am going to discuss, T2 does so in far greater proportion, so please forgive me if my analysis tends to focus on it a little more. ...read more.

The alien mother is a giant reproductive machine. But even in Aliens, there is an association with masculinity and the military. The alien species is identified as the 'ideal' soldier, a pure killing machine which is not distracted from its biological needs by greed or selfishness or other desires. Just as the humans place 'atmosphere processing plants' on alien planets in order to create the conditions necessary for colonization, by converting the human body into a mere vessel for their own reproduction, the aliens are also related to patriarchy which has traditionally defined women as vessels for the reproduction of the male seed. It is for this reason that it is a woman who is not only the aliens' main adversary, but also the figure with the resources required to resist them. Unlike the men, Ripley and the Alien are both capable of acting as natural vessels of reproduction, without which, the family unit, Alien or human, would not exist. If one watches Aliens, and it's predecessor, the deaths of the central characters follow a patriarchal order; the men are killed first and foremost, with the women surviving until the very end. Although my focus here is Aliens(1986), One must also acknowledge the original movie, to fully understand Cameron's depiction of such family issues. The original, "Alien" (Director Ridley Scott, US 1979), takes us to the influential themes of motherhood and birth. The crew of the spaceship is woken from suspended animation; they are reborn in preparation for death at the claws of the alien. In this case the alien face-hugger rapes the male body, which then becomes the site of birth for the alien. The male body is finally invaded/violated and killed. As individuals or as a group the men cannot fight the alien, it is the woman who is able to outsmart and evade the alien. The sexuality of the alien is ambiguous, as a face-hugger it could be seen as a h********l or female r****t, as a fully-grown alien it takes on male characteristics. ...read more.

If Sarah, John, and the terminator do form a kind of family group during the film, it is one which is clearly distinguished from the 'normal', patriarchal family of tradition. There is no clear authority figure-certainly no patriarch-and they are placed in clear distinction to the 'normal', middle class, family unit who act as John's foster parents at the beginning of the film. If Sarah, John, and the terminator compose an ideal family group, it is one, which is made up of a mother whom is neither completely masculine, nor feminine , that society has defined as insane, a son who is a juvenile delinquent, dependent on no one, and a father who steers away from patriarchal authority, indulges traditionally 'feminine' traits, and simply tries to understand his son, whilst being careful not to invite reliance on himself as a father. Rather than presenting the family as a radically different unit from what it once was, Cameron has highlighted the currently changing structure of our traditional family unit. This essay has discussed the ways in which it has dealt with the process of rationalization, the changing nature of social institutions, particularly the family and parental roles; and it's questioning of concepts of 'normality'. In the process, it has also shown how the changing nature of family life has created a current crisis of identity, in terms of family roles in contemporary society, highlighted by the very films discussed here. While these issues are frequently related to issues of gender and sexuality, I have examined the ways in which they relate to adult roles within the family unit, particularly in terms of paternalism, patriarchy and matriarchal power. Horror texts of the last two decades have often questioned forms of male power, and so given greater and greater focus to female characters, particularly in the role of the hero. It is for this reason that horror has not only been such an important and enduring area for the exploration of the changing nature of femininity, but for the state of flux of Family relationships and human interaction. ...read more.