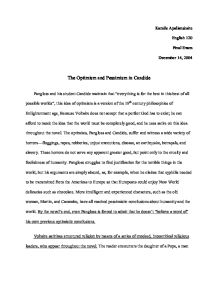 The Optimism and Pessimism in Candide

Kamile Apalianskaite English 120 Final Exam December 14, 2004 The Optimism and Pessimism in Candide Pangloss and his student Candide maintain that "everything is for the best in this best of all possible worlds", this idea of optimism is a version of the 19th century philosophies of Enlightenment age. Because Voltaire does not accept that a perfect God has to exist; he can afford to mock the idea that the world must be completely good, and he uses satire on this idea throughout the novel. The optimists, Pangloss and Candide, suffer and witness a wide variety of horrors-floggings, rapes, robberies, unjust executions, disease, an earthquake, betrayals, and slavery. These horrors do not serve any apparent greater good, but point only to the cruelty and foolishness of humanity. Pangloss struggles to find justification for the terrible things in the world, but his arguments are simply absurd, as, for example, when he claims that syphilis needed to be transmitted from the Americas to Europe so that Europeans could enjoy New World delicacies such as chocolate. ...read more.

The young Baron scolding, "you have the impudence to think of marrying my sister, who has seventy-two quarterings in her coat of arms, and you dare to talk to me of such a hot headed notion" (67). A belief of this kind would be very common among the higher class, as marriage to a person of a lower status would be considered inappropriate. This statement shows the common view of superiority among the upper class society in eighteenth century Europe. Candide also shows the corruption of money in the novel. When Candide acquires a fortune in Eldorado, it looks as if the worst of his problems might be over. Arrest and bodily injury are no longer threats, since he can bribe his way out of most situations. Candide is unhappy as a wealthy man, the experience of watching his money trickle away into the hands of dishonest merchants and officials tests his optimism in a way that no amount of flogging could. ...read more.

At the time Candide was written, Voltaire clearly had already lived a long, full life with many experiences to draw discernment from. What he witnessed and experienced in his life contradicted the philosophy and absolute certainty of the optimists; or at least, it proved to him that the optimists were only half-correct. The duality of man, and of all the things in this world for that matter, was evident to him. The basis of Candide is based on a young and naive character's experiences in a harsh, rude, and cruel world. In nearly every instance, Candide's observations and experiences show him that mankind is evil. Accompanying these experiences are characters that represent optimism, which is personified by the character Pangloss; and pessimism is represented by the character Martin, who believes that man, "...is born to live either in convulsions of distress or the lethargy of boredom." Voltaire accepted neither Martin's pessimism nor Pangloss's optimism at face value. Each perspective is explored and valued equally, allowing the reader to decide for themselves through insightful consideration of the qualities of both views. ...read more.