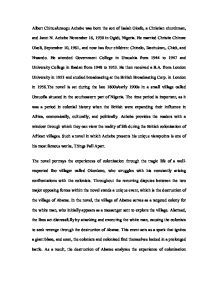 Albert Chinualumogu Achebe was born the son of Isaiah Okafo, a Christian churchman, and Janet N. Achebe November 16, 1930 in Ogidi, Nigeria. He married Christie Chinwe Okoli, September 10, 1961, and now has four children: Chinelo, Ikechukwu, Chidi, and Nwando. He attended Government College in Umuahia from 1944 to 1947 and University College in Ibadan from 1948 to 1953. He then received a B.A. from London University in 1953 and studied broadcasting at the British Broadcasting Corp. in London in 1956.The novel is set during the late 1800s/early 1900s in a small village called Umuofia situated in the southeastern part of Nigeria. The time period is important, as it was a period in colonial history when the British were expanding their influence in Africa, economically, culturally, and politically. Achebe provides the readers with a window through which they can view the reality of life during the British colonization of African villages. Such a novel in which Achebe presents his unique viewpoints is one of his most famous works, Things Fall Apart. The novel portrays the experiences of colonization through the tragic life of a well-respected Ibo villager called Okonkwo, who struggles with his constantly arising confrontations with the colonists. ...read more.

138. This quote clearly proves the Ibo's negative impression towards the arrival of the white man, and it also reveals their level of concern towards this issue since they have decided to consult their god before taking immediate action. This impression is derived from the Ibo's familiarity with rumors of destructive colonization in nearby villages. In the eyes of the Ibo, their society also seems flawless, and thus it is completely normal for an Ibo villager to sense nationalistic feelings towards his prized culture. Such nationalistic feelings stem from their expectations that the white man would spread disunity throughout their land, and thus, it is their duty to protect it. "He has put a knife on the things that held us together and we have fallen apart." Pg.176. This quote is told by Oberieka, Okonkwo's friend who comes to visit him during his exile period. It proves the validity in the Ibo's impression of the white man, since he has spread disunity between the Ibos by bringing forth a new religion that divides them into separate societies. . Most Ibo perceived Christianity to be abominable, and Christian colonists believed the Ibo way of worshipping multiple gods was wrong. ...read more.