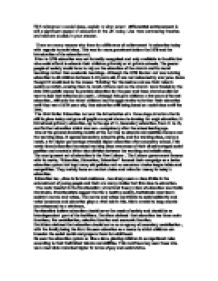 With reference to social class, explain to what extent differential achievement is still a significant aspect of education in the UK today. Use two contrasting theories and relevant studies

With reference to social class, explain to what extent differential achievement is still a significant aspect of education in the UK today. Use two contrasting theories and relevant studies in your answer. There are many reasons why there is a difference of achievement in education today with regards to social class. This was far more prominent before the 1870 and the introduction of the education act. Prior to 1870 education was not formally recognised and only available to the elite few who could afford to educate their children privately or at private schools. The poorer people of society would have to rely on the education of the church and its moral teachings rather than academic teachings. Although the 1870 Forster Act was to bring education to all children between 5-10 years old, it was not welcomed by everyone. ...read more.

One of the ground-breaking results of the Act was to educate and mobilise women and the working class. It opened secondary school to girls, and the working class, and as a result, a far higher percentage attended higher education after secondary school. This newly found education increased working class awareness of their disadvantaged social position and created a bitter class division between the working and middle class. The most present act of education is the New Labour . The Labour government famous with its motto, "Education, Education, Education" focused their campaign on a better education system but kept many old policies such as consumer choice league tables and competition. They mainly focus on market choice and value for money in today's education. Education has , since is formal exsistence , has always seen a class divide in the acheveiment of young people and their are many studies that link class to education. ...read more.

He seen the education system as like a sieve, placing children in occupational roles according to their individual talents and abilities. This metritocaracy seen those who were most able rewarded higher in terms of pay and social status. The economic function is to train children in the field they will be persuing in the future. Those who were more accedemic would train in literacy and numeracy and others would train in more vocational subjects to prepare them for the role they will play in society as adults. Doing this kept order and the collectively shared norms and values of society. Functionalists saw that there was a hidden ciricullum with education which involved learning rule, routine and regulations were students lear without realising they have learned. Functionalist call this way of learning informal learning. There are many studies that support Durkhiems view. One study would be Douglas (1970) ?? ?? ?? ?? ...read more.