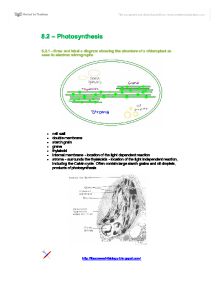 The NADPH stays in the stroma to be used in the light independent reactions. Photosystem 1 is reduced by the electrons from PS2. Photosystem 2 is then reduced so that it can absorb more light. When water is split through photolysis, electrons are given to the photosystem. This is the source of H+ ions and the waste O2. Since there is a high concentration of H+ ions in the thylakoid lumen, they can diffuse back into the stroma through the pore in ATP synthase. This process drives the phosphorylation of ADP to ATP. During these redox reactions in the light dependent reactions, the energy levels of the electrons change. This is summarised below. 8.2.4 - Explain photophosphorylation in terms of chemiosmosis A high concentration of H+ ions accumulates in the thylakoid space due to proton pumping. This results in a proton gradient, causing protons to be pumped across the membrane through the ATPase molecules. This drives the motor mechanism of the structure, reducing ADP into ATP. This is like the process used in respiration. The excited electrons the move to fill the vacancies in the reaction centre of PS2, then in PS1. ...read more.