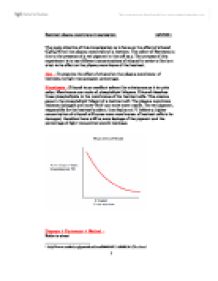 Beetroot Plasma Investigation. The main objective of this investigation is to focus on the effect of ethanol (C2H5OH) on the plasma membrane of a beetroot.

Beetroot plasma membrane investigation 14/2/2011 The main objective of this investigation is to focus on the effect of ethanol (C2H5OH) on the plasma membrane of a beetroot. The colour of Beetroots is due to the presence of a red pigment in the cell sap. The purpose of this experiment is to use different concentrations of ethanol in order to find out what is its effect on the plasma membrane of the beetroot. Aim - To examine the effect of ethanol on the plasma membrane of beetroots by light transmission percentage. Hypothesis - Ethanol is an excellent solvent for substances as it is quite polar. Membranes are made of phospholipid bilayers. Ethanol dissolves these phospholipids in the membranes of the beetroot cells. This creates gaps in the phospholipid-bilayer of a beetroot cell. The plasma membrane becomes damaged and more 'fluid' can move more easily. The red pigment, responsible for the beetroot's colour, then leaks out.1 I believe a higher concentration of ethanol will cause more membranes of beetroot cells to be damaged, therefore there will be more leakage of the pigment and the percentage of light transmitted should decrease. Diagram + Equipment + Method - Refer to sheet Dependent Variable - * Percentage of Light Transmitted (%)The variable we will be measuring is the percentage transmission of light through the solution of ethanol after the beetroot discs have been in the solution for 15 minutes. ...read more.

40 90,41 60 89,96 60 87,33 60 88,65 80 84,38 80 86,55 80 85,47 100 90,16 100 86,07 100 88,12 Table 3. Standard deviation of both the trial's mean combined Ethanol solution/% � 0.1 Standard Deviation of percentage of light transmission/ % � 0.01 0 8,87 20 9,74 40 8,14 60 8,47 80 6,68 100 11,63 Error bars = Standard Deviation Calculations - To calculate the mean all the values for each trial and each value was added for each concentration and divided by the number of samples E.g.: For trial 1 To calculate the standard deviation of the values in the graph this general formula was used: 2 Conclusion - With the results shown a certain conclusion can be reached. It seems that the percentage of light transmission is generally directly proportional to the concentration of ethanol. The higher the ethanol concentration the lower the percentage of light transmission measured by the colorimeter was. Hence as more ethanol was put into the beetroot slices, the more membranes were dissolved allowing the pigment to leave the cells and stain the solution outside. Scientifically, this is because ethanol is a great solvent which means substances can easily dissolve in it. Because of the nature of ethanol as a chemical is it able to get into the cell very easily. This disrupts the balance of the cells' diffusion and osmotic environment. ...read more.

thing we did not control correctly was the volume of samples taken from the test tubes to be put in the colorimeter. A pipette was used but this is considerably inaccurate and difficult to measure exactly (as the numbers are transparent). If more of the sample was taken then the results in the recorder would be most affected as different volumes of solutions have different percentages of transmissions of light. A small measuring cylinder (10cm3) would be most appropriate for this and decrease the chance of mistakes or anomalies. The standard deviation in both the first graph and the table gives us clues as to where errors might have occurred. Where the standard deviation is large the variety of results for a trial was large, such as the part using 100% ethanol, where the standard deviation was as large as 11.63. I also think that there no substantial errors, like systematic errors, were made but mainly human errors if possible which have been discussed earlier. Some errors and anomalies can be explained, some not and others we do not know for certain. In all I believe the effect of the anomalous results on the investigation was partly insignificant and can be explained with human errors. Therefore I believe the data is reliable and that this investigation and research was effective and efficient as a whole. The only serious problem is indeed the concentration of 100% ethanol solution. 1 http://www.madsci.org/posts/archives/2006-03/1143666101.Cb.r.html 2 http://geographyfieldwork.com/standa5.gif 3 www.studyzone.com ?? ?? ?? ?? 1 ...read more.