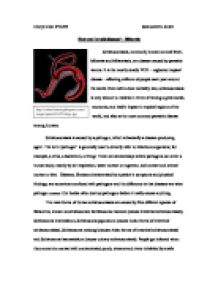 Cheryl Chan 9YC/9F Science/Mrs. Smith How can I avoid disease? - Bilharzia Schistosomiasis, commonly known as snail fever, bilharzia and bilharziasis, is a disease caused by parasitic worms. It is the mostly deadly NTD - neglected tropical disease - affecting millions of people each year around the world. Even with a low mortality rate, schistosomiasis is only second to malaria in terms of having a great social, economic, and health impact in tropical regions of the world, and also as the most common parasitic disease among humans. Schistosomiasis is caused by a pathogen, which is basically a disease-producing agent. The term 'pathogen' is generally used to directly refer to infectious organisms; for example, a virus, a bacterium, or fungi. There are several ways where pathogens can enter a human body; mainly by air respiration, water contact or ingestion, soil contact and animal contact or bite. Diseases, illnesses characterized by a patient's symptoms and physical findings, are sometimes confused with pathogens and the difference is that diseases are what pathogen causes. Our bodies often destroy pathogens before it really causes anything. The main forms of human schistosomiasis are caused by five different species of flatworms, known as schistosomes: Schistosoma mansoni (causes intestinal schistosomiasis), Schistosoma intercalatum, Schistosoma japonicum (causes Asian forms of intestinal schistosomiasis), Schistosoma mekongi (causes Asian forms of intestinal schistosomiasis) and Schistosoma haematobium (causes urinary schistosomiasis). ...read more.

It is often to be the only symptom. Muscle pain, headache, diarrhea, fever, vomiting, coughing, frequent, painful and b****y urine are also common problems and can come within a month of the infection. Untreated snail fever may cause deadly urinary system or liver inflammation and scarring, bladder tumors and bowel cancer. Children who are recurrently infected can develop anemia, malnutrition, learning difficulties and distended bellies. Seldom, seizures, paralysis, or spinal cord inflammation can also be brought by eggs found in the brain or spinal cord. However, a single dose of praziquantel has been shown to reduce the severity of symptoms in those re-infected with the disease There are few defenses that the body provides against the schistosomiasis pathogen. An inflammatory reaction will be produced around each egg, but the inflamed tissue will then harden and block blood and lymph vessels, causing problems for the human body. No vaccine in preventing infection is available at the moment; nevertheless bilharzia can be treated with a variety of drugs. As mentioned above, praziquantel is a common treatment and is most effective against adult worms, requiring an immune reaction to be fully effective. It may cause headaches, tiredness, vomiting, loss of appetite and increased sweating as side effects, yet it will kill the majority of parasites within the bloodstream. Despite that, some worms will possibly survive and developing larvae that are not altered by the drug can rebuild the infection. ...read more.

Nonetheless, the disease of schistosomiasis and its spread around the world relates greatly to social issues. As many people who take refuge near the contaminated rivers often live in unfortunate conditions, they would also have to use the waters for everyday activities, like fishing, washing and cooking. That is a main reason to why schistosomiasis continues growing. Another is because the public, especially ones living at risk, knows very little about the disease. In societies too poor to develop advanced sanitation systems of rivers and streams, hundreds of people would still bathe in the infected waters without much care to their health. This is why recently, education campaigns about the risks of bathing in fresh water have been organized to raise awareness among people. Also, refined water quality, snail population control and treatment of infected people have started to make good accomplishments in endemic areas, involving China, Brazil, Egypt, and Africa. Schistosomiasis, also known as bilharzia or snail fever, is a disease produced from the schistosomiasis pathogen. Despite being considered widespread, it is found mainly in parts of Africa where water sanitation is not developed. There are different types of schistosomiasis; all exposed from contaminated waters and each can cause various symptoms, some fatal, some not. It can be treated from the drug praziquantel, however still causes big impacts on the economy of societies and is affected from social issues. In order to avoid this disease, we should be cautious when travelling in infected regions and always keep one's hygiene in mind. ...read more.