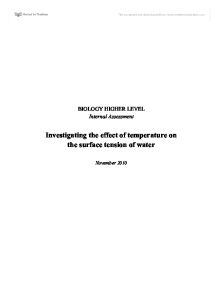 Biology experiment. Investigating the effect of temperature on the surface tension of water

BIOLOGY HIGHER LEVEL Internal Assessment Investigating the effect of temperature on the surface tension of water November 2010 Research Question Will increasing the temperature affect the surface tension of water? Hypothesis If the temperature of the water is increased, then it will reduce the capacity of the surface tension as increasing temperature increases the kinetic energy of the water molecules, causing them to move faster, thus having less cohesive forces and surface tension. Safety Figure I: Risk assessment of possible hazards Hazard Reason Precaution Hot water Water at higher temperatures can burn Handle hot water with care and avoid touching Hot plate At high temperatures the hot plate can burn Handle hot plate with care and avoid touching surface Variables Figure II: Independent, dependent and controlled variables in the experiment Type of Variable Variable Range of Values or Method of Control Independent Temperature of the water From 10.0oC to 50.0oC Dependent Number of drops coin can hold Taken from number of drops that coin holds before it overflows and breaks (excludes the drop that made it overflow) Controlled Temperature When a specific temperature is needed for the water and coin, it will be controlled by the water bath. ...read more.

The result values were also quite similar. There was no great deviation and the results fell within acceptable differences. The advantage in this experiment was the counting of the droplets, which had clear distinctions. However, there were a few limitations in this experiment. There were possible sources of random error. One possible source of error was an inconsistent experimental technique. As this experiment requires precision of individual technique, especially with the dropping of droplets, this could possibly be the largest source of random error. However, this was minimised through the repeated trials. Temperature fluctuation is also another source of possible error. While the water bath and hot plate can control the temperature, the water in the pipette could fluctuate. But this can be reduced by quickly performing the experiment for each trial. Also, there were possible systematic errors in this experiment. If the equipment was calibrated incorrectly, it would affect the values. Further improvements could also be proposed for this experiment. A trial run for each temperature can be performed in order to gauge an approximation for the surface tension which would ensure that the first result does have a great difference between the others. More repeats, such as 10 trials, would be also beneficial to the nature of this experiment. ?? ?? ?? ?? Page 2 of 3 ...read more.