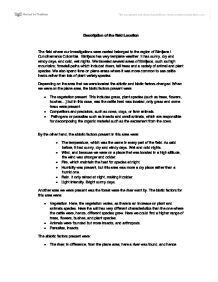 Description of the field Location

The field where our investigations were carried belonged to the region of Simijaca / Cundinamarca Colombia.  Simijaca has very template weather. It has sunny, dry and windy days, and cold, wet nights. We traveled several areas of Simijaca, such as high mountains; forestall paths which included rivers, tall trees and a variety of animal and plant species. We also spend time on plane areas where it was more common to see cattle herds rather than lots of plant variety species.

By the other hand, the abiotic factors present in this area were:

Another area we were present was the forest were the river went by. The biotic factors for this area were:

The abiotic factors present were:

Finally, the last area that we visited was the mountains. Here the biotic factors changed a lot. We can see a difference not only because of the amount of vegetation but of species found on each area.  So the biotic factors were:

The abiotic factors were: