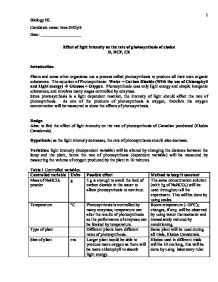 The entire experiment could have been performed again, and the new results could be combined 1 Advanced Biology by Michael Kent, Oxford University Press if the same plant is used. But the photosynthetic rate of the same piece of pond weed would eventually decrease over time anyway. Repetitions would, however, improve the overall reliability of the results. Finally, results of an experiment might be affected by improper control of controlled variables as well. Some of controlled variables might not have been considered before the experiment, for example, while performing the experiment, some of the oxygen produced from photosynthesis may have dissolved into the water. Some oxygen may have even been used by micro-organisms living on the pond weed. Some oxygen is also used during the respiration of the plant. As I discussed minor improvements in the above passage, major suggestions for improvements of investigation could also be outlined. Investigating the effects of the quality of light on the rate of photosynthesis, for example, different colored light, could be used. This could have commercial benefit, as finding out the effect of the color of light on the rate of photosynthesis could aid plant rowers to find out which type(s) of light make(s) plants grow quickest. If not the color of light, other factors that alter the rate of photosynthesis, such as temperature or pH could be also investigated. ?? ?? ?? ?? 1 ...read more.