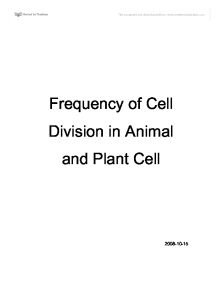 Frequency of Cell Division in Animal and Plant Cell 2008-10-15 DESIGN: Question: How is the process of mitosis different between onion root tip cells and whitefish blastula cells? Hypothesis: If the percentage of prophase is the highest percentage of cells in division among mitotic phase for both onion root tip cells and whitefish blastula cells, then it means that interphase is the most occurring phase in mitosis because all stages must go though interphase before proceeding to other stages of mitosis. The differences between onion root tip cells and whitefish blastula cells in process of mitosis might happen in telophase. Since onion root tip cell is a plant cell, in telophase, it will produce cell plate in order to divide. However, in telophase, since whitefish blastula cell is an animal cell, it will produce cleavage furrow to divide into two separate cells. Variables: Controlled variable is a microscope because it doesn't make changes. Independent variables are the slides because it doesn't change but other variables are dependent on the slides. Dependent variables are the phases of mitosis in cells because they differ depending on the slide we observe through. Materials: - Compound microscope - Prepared slides of onion root tip - Prepared slides of whitefish blastula Procedure: Onion (Allium) Root Tip: Onion (Allium) root tip slide was prepared and was placed it on the stage on the compound microscope. It was first viewed under the low-power magnification and the slide was adjusted so that the slide was focused at the centre of the field of view. The coarse-adjustment was used to move the stage closer to the objective lenses for the clear view of the slide. The fine-adjustment was used to have a clear look at the slide. To have more focused and detailed view, nosepieces of the microscope were rotated to medium-power and then to high-power. Each stages of mitosis cycle were drawn on the diagram. ...read more.

They were similar in the structures of mitosis and structure of the cell. Both cells had same process in stages in mitosis and they both contained similar organelles like nucleus, microtubules and chromosomes. However, they were different in the process of mitosis and some in structures. Whitefish blastula cells, which are animal cells and onion root tip cells, which are plant cells differed in mitosis. The difference was evident at the stage of telophase when cells were dividing into two cells. In plant cell, which is onion root tip cell, the cell created a cell plate in the middle of two cells. On the other hand, in animal cell, which is whitefish blastula cell, the cell created a cleavage furrow in the middle of two cells. Whitefish blastula cells did not contain cell wall but only contained cell membrane because they were animal cells but onion root tip cells contained both cell wall and cell membrane because they were plant cells. Also plant cell had stages of immature and mature cells while animal plant cells only had one stage which was interphase. The percentage of frequency of cell division was calculated by multiplying number of cells from specific stage by 100 and then dividing those by the total number of cell counted. From table 3 and 4, it is shown that prophase was the most occurring stage in mitosis. From the table 3, 66% of stages in mitosis were prophase in plant cell and from table 4, 72% of stages in mitosis were prophase in animal cell. From table 1 and 2, the data shows that interphase was the most occurring stages during mitosis. Relating the data from all tables, it could be concluded that interphase is the most occurring stage in mitosis since all stages must go though interphase before proceeding to other stages of mitosis. Spindles were visible in both animal and plant cells. ...read more.