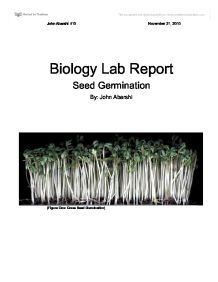 The cress seeds that remained in the cold, stayed dormant and the heat alleviated that dormancy. [4] Evaluation I believe that my results are quite reliable. All controlled variables were kept controlled and so an unfair test would be unusual. If I were to carry out this experiment again, I would end up with the same results. That is how I know it is reliable. Another factor that ensures reliability is that multiple cress seeds were planted so it could not just have been a fluke. For these reasons, I believe that my results are reliable. I also believe that my results are quite valid. It is not as if the reason for some of my plants growing faster than others is reliant on something else. The results are well grounded in the logic of plant germination. It is justifiable with an adequate scientific explanation and thus I believe my results are valid to the fullest extent. Naturally, there are improvements that could be made to the experiment. If I were to execute this experiment again, I would monitor the seeds more often. Sometimes when I would come back to my seeds the next day, they would look enormously different to the day before. In the time in between these two steps, a lot could have happened. In this way, I feel that I have missed out on some crucial steps. Other than that, I am quite pleased with my results and the overall experiment. I have learned a lot throughout the entire process. ...read more.

A sound effort into the variables affecting seed germination. In an investigation it is normal to choose one independent variable and focus on this. However, both experiments were examined separately quite well.

The introduction would have benefited from giving some more detail into the science behind seed germination. For example how the seeds have evolved to not germinate when it is cold as this is the winter months when there is less sunlight to photosynthesise from.

The graphs showed the trends in the data very well and linked in well with the analysis and conclusion.