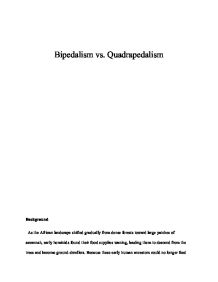 Bipedalism vs. Quadrapedalism Background As the African landscape shifted gradually from dense forests toward large patches of savannah, early hominids found their food supplies waning, leading them to descend from the trees and become ground-dwellers. Because these early human ancestors could no longer feed where they lived, they were forced to begin carrying large amounts of sustenance over long distances back to their home bases-a tricky task had they remained quadrupeds. While some anthropologists contend that early hominids gathered fruits and nuts, a few argue that they were scavengers, stealing predators' kills. An upright stance would have enabled our ancestors to lug carcasses to safer areas for consumption, while also allowing them to see other food sources or potential danger at greater distances.1 Aim The aim of the experiment is to find out a plausible theory to why humans evolved into bipedal organisms from being quadrapedal. To compare bipedalism movement with quadrapedalism movement. Is traveling with food across distances easier and quicker being bipedal or quadrapedal? Hypotheses Being able to walk as a quadrapedal organism will take more time and energy since ones hands are not free. A bipedal organism has an easier ability to see ahead and find the quickest way to his home. ...read more.

4 Legs W/ Book 0.0004 Rejected 2 Legs Vs. 4 Legs ( No Book) 0.0026 Rejected From the results the data appears to be valid. The experimenters on 2 legs had a faster time than those on 4 legs with or without books in their hands. The 2 legged with no book had the smallest average of 6.5 seconds and 4 legged with books had the highest average time of 13.6 seconds. Four legged with books is the only noticeable outlier. As seen in the graph the time increases from 2 legs with no book to the highest times at 4 legs with books. The times recorded are very accurate with slight human error of not being able to stop the watches on the exact second the subjects reached the top step. From both the T-test the Ho was rejected at alpha level 0.5. Graphs: Conclusion From the experiment we rejected the Ho for both T-tests. There is a significant difference in the amount of time it takes to carry food between being bipedal and quadrapedal. From this there is evidence to suggest that the theory of hauling food is plausible. ...read more.

To change the procedures for better data the sample size needs to be larger. With a larger sample size the more accurate the speeds with be and that will increase the power of the experiment. With a larger sample size more T-test can be conducted to farther prove the results. Testing the experiment over greater distances will also improve the experiment. It will reduce the lurking variables that may be with having experiments in short distances. This will increase the validity of the results. Since humans can never walk on fours properly without somehow cheating the investigation should be improved by using animals that have no choice but to walk on fours. We are accustomed to using our feet to walk and our hands for other things. Using a monkey would be a good choice to improve the investigation because they have similar features to humans. Monkeys don't have that benefit of walking on 2 feet so the results would be even more reliable. Removing things such as trees from their environment and putting their food up high will cause the animals to stand on two legs. Their only way of survival would be to stand on 2 legs so the results are more valid because they cannot cheat this. 1 Chadda, Rita, NOVA, " The Family that Walks on All Fours" 3/10/2008 ?? ?? ?? ?? ...read more.