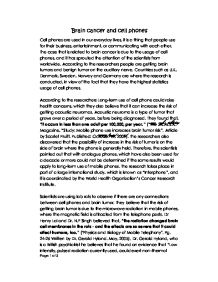 Brain cancer and cell phones Cell phones are used in our everyday lives, it is a thing that people use for their business, entertainment, or communicating with each other. The case that is related to brain cancer is due to the usage of cell phones, and it has sprouted the attention of the scientists from worldwide. According to the researchers people are getting brain tumors and benign tumor on the auditory nerve. Countries such as U.K, Denmark, Sweden, Norway and Germany are where the research is conducted, in view of the fact that they have the highest statistics usage of cell phones. According to the researchers Long-term use of cell phone could raise health concerns, which they also believe that it can increase the risk of getting acoustic neuromas. Acoustic neuroma is a type of tumor that grows over a period of years, before being diagnosed. They found that, "it occurs in less than one adult per 100,000, per year." ("The Standard" Magazine, "Study: Mobile phone use increases brain tumor risk". Article by Scarlet Pruitt. Published: October 14, 2004). The researchers also discovered that the possibility of increase in the risk of tumor is on the side of brain where the phone is generally held. Therefore, the scientists pointed out that with analogue phones, which have also been used for a decade or more could not be determined if the same results would apply to long-term use of mobile phones. ...read more.

This research has many benefits toward people in their lives. People, who are using cell phones for more than a decade or more, will start to use the mobile less than what they normally do, since the research could warn people by telling them how harmful it could be to their health problem, and it can prevent them from getting tumor. In additional it can also improve the mobile phone company of making their products less harmful. Which they could try to invent new phones which create less radiation on it, as a result it can lower the amount of risk that people will get brain tumor, ever since that people won't stop using mobile phones in the recent century, because it is a thing that people can't live without it. For example, the mobile phone helps the business man from different countries communicate better, instead of going oversea to about the works, they could use phones. The sufficient of data could be a reason that makes the research unreliable. As other researches of the cell phones determine that the use of cell phones does not likely to cause brain cancer, this may confused the readers or weather to trust or not to trust the research. Furthermore, there are many types of mobile phones, and depend on what brand or type of mobile phones it is it might have different amount of radiation that is released at each time they talk, and also it is also depend on the length of time that they talk on the phone in the 10 years. ...read more.

The experimenting with animals is something accepted, because it is a benefit for scientific research, ever since by using rats scientists can know about new medicament or about human biology. Ethically rats are used in experiments instead of human, because they have similar DNA, cells, Tissues..etc with humans, therefore, no one have ever thinks that when researchers are using rats for experiments they are not respect them, they are hurting them and making them from suffering. In many experiments they are being harmed or even kill during the procedure, or after it is completed, and have they ever think about it is unethical to cause pain and the death of an animal who has no chance of defending them?. In addition, when people remove animals from their natural habitats to use in study, it can disturb and affect all of the life in that ecosystem. For example, experimenting rats lead to large numbers of rats being removed from their wild homes, which causes animals that eat rats for survival to death. Books: * Hyland, Gerald (2005, May). Physics and Biology of Mobile Telephony. 24-26. * Pruitt, Scarlet (October 14, 2004). Mobile phone use increases brain tumor risk. Internet: * Long-Term Mobile Phone Use and Brain Tumor Risk. Oxford Journals. 2nd.february.2008. http://aje.oxfordjournals.org/cgi/content/abstract/161/6/526 * The Internet and The Phone Mobile's Impacts on Societies. 1st. July.2007. Meta Pengetan. 2nd.february.2008 http://fathananiq.wordpress.com/2007/07/01/the-internet-and-the-phone-mobile%E2%80%99s-impacts-on-societies/ * Mobile Phone "brain risk".6 ,november,2005. BBC NEWS 2nd.february.2008. http://news.bbc.co.uk/1/hi/health/507112.stm * Mobile Phones & Brain Damage. 28,September, 2004 institution of science society 2nd.february.2008 . http://www.i-sis.org.uk/MPABD.php * ?? ?? ?? ?? Page 1 of 5 ...read more.