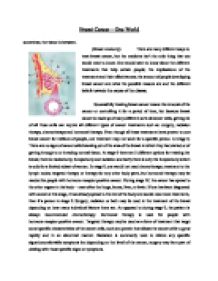 Breast cancer. Successfully treating breast cancer means the removal of the cancer or controlling it for a period of time, but because breast cancer is made up of many different sorts of cancer cells, getting rid of all those cells can require all differe

Breast Cancer - One World Breast cancer is an uncontrollable growth of cells in the breast. Cancer occurs as a result of mutations, in the genes responsible for regulating the growing rate of cells. The genes are in the nucleus of each cell, which acts as the "control room" of the cell. Regularly, the cells in the human body replace themselves through an orderly process of cell growth or mitosis: healthy new cells take over as old ones die out. But over time, mutations can trigger certain genes and "turn off" others in a cell. That specifically changed cell gains the ability to keep dividing without control or regulation, producing more cells just like itself and forming a tumour. Breast cancercan begin to grow in different areas of the breast - the ducts, the lobules, or sometimes, the tissue in between. (Breast Anatomy) There are many different ways to treat breast cancer, but the medicine isn't the only thing that one would need to know. One would want to know about the different treatments that help certain people; the implications of the treatments and their effectiveness; the amount of people developing breast cancer and what the possible reasons are and the different beliefs towards the causes of the disease. ...read more.

There are various ways by which chemotherapy is administered, there is oral which is the chemotherapy drugs in the form of pills, tablets or liquids this method of chemotherapy is preferred mostly because of the ease; and there is also an injection. The syringe is injected into the muscle, under the skin or directly into the cancerous area. The toxins attack healthy, dividing blood cells and cause blood poisoning. The gastrointestinal system is thrown into convulsions causing nausea, diarrhoea, loss of appetite, cramps, and progressive weakness. Some drugs can swamp the entire lining of the intestines. Reproductive organs are affected causing sterility. The brain loses memory. The hair falls out. Eyesight and hearing are impaired. The kidneys are damaged. Sores appear in the mouth and throat. The body bleeds and bruises easily and can't fight infections. Despite all the side effects, in early-stage breast cancer, standard chemotherapy regimens lower the risk of the cancer coming back. In advanced breast cancer, chemotherapy regimens make the cancer shrink or disappear in about 30-60% of people treated. But besides chemotherapy there is also radiation therapy � also called radiotherapy � it is a highly targeted and a highly effective way to destroy cancer cells in the breast that may have stuck around after the surgery. ...read more.

"The truth is that soy protein contains dangerous levels of plant oestrogens. Although not identical to human oestrogen, these have been proven to increase breast cell proliferation, a widely accepted marker of breast cancer risk." - (Soy Cause Cure Cancer) In conclusion, breast cancer is becoming too common in our day-to-day society, women and men need to be more precautionary to prevent breast cancer. Unless one knows that the cell is in the genes, one could take test (mammogram), once they get to a certain age point where they need to worry about cancer. Overall, we have learnt that is not merely one treatment to remove/cure breast cancer. And we also learned that even though some treatments may have a 95% survival rate, does not instantly mean that it will work for you. I would personally choose the surgery, either a mastectomy or lumpectomy and radiation afterwards to increase my chances of living cancer-free longer. Although Chemotherapy has very good survival rates, it is also more painful and difficult to endure. The side-effects are worse and it may not work. Furthermore, our research has done well, it has shown us the risks of certain ways of living and the precautions one should take. ...read more.