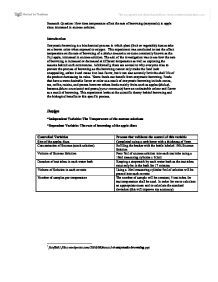 Introduction Enzymatic browning is a biochemical process in which plant (fruit or vegetable) tissues take on a brown color when exposed to oxygen. This experiment was conducted to test the affect temperature on the rate of browning of a Malus domestica or more commonly known as the Fuji apple, immersed in sucrose solution. The aim of the investigation was to see how the rate of browning is increased or decreased at different temperature as well as exploring the reasons behind such occurrences. Additionally, there are several to why everyone tries to prevent the process of browning as this browning cannot only make the food look unappealing, soften it and cause it to lose flavor, but it can also severely limit the shelf life of the product decreasing its value. 1Some foods can benefit from enzymatic browning. Foods that have a more desirable flavor or color as a result of enzymatic browning include cocoa, tea, coffee, raisins, and prunes however others foods mainly fruits such as apples (Malus), bananas (Musa acuminate) and pears (pyrus communis) have an undesirable colour and flavor as a result of browning. This experiment looks at the scientific theory behind browning and the biological benefits to this specific process. Design *Independent Variable: The Temperature of the sucrose solutions *Dependent Variable: The rate of browning of the apple discs Controlled Variables Process that validates the control of this variable Size of the apples discs Completed using a cork borer with a thickness of 5mm Concentration of Sucrose (stock solution) Refilling the beaker with the bottle labeled 10% Sucrose Solution Volume of Sucrose Solution Pour 7ml of sucrose solution into each test tube using a 10ml measuring cylinder � 0.2ml Duration of test tubes in each water bath Keeping a stopwatch by each water bath as the test tubes must only be in the bath for 17 minutes Volume of Solution in each cuvette Using a 10ml measuring cylinder 5ml of solution will be poured into each cuvette Number of samples per temperature The number of sample will be constant, 5 test tubes for test temperature shall be used. ...read more.

In general, the qualitative data correlates with quantitative data. Mean of Temperatures calculated with anomalies Temperature � 0.1 �C Mean (2 s.f.) 30 �C 0.293 40�C 0.332 50 �C 0.405 60�C 0.301 70 �C 0.040 Calculation of Standard deviation Where S= Standard Deviation = Each value in the sample = Mean of all the Values N= Number of Samples Standard Deviation calculated with anomalies Temperature � 0.1 �C Standard Deviation (2 s.f.) 30 �C 0.011 40�C 0.041 50 �C 0.058 60�C 0.012 70 �C 0.009 The Graph for Average Percentage Absorption for Apple discs at each Temperature (with anomalies) To calculate the error bars for standard deviation and use them in the graph below, we must do the following: Apply standard deviation, using the follow formula: 4 s = series number ?I = point number in series s ?m = number of series for point y in chart ?n = number of points in each series ?yis = data value of series s and the Ith point ?ny = total number of data values in all series ?M = arithmetic mean. The advantage of using such error bars is that because they show how the data are spread. Range error bars encompass the lowest and highest values. In this case, we shall be able to see whether a single result fits within the normal range. We shall also be able to make inferences from the data (i.e., to make a judgment whether the rate at different temperatures are significantly different, or whether the differences might just be due to random change or chance). This graph shows the rate increased greatly from 40�C to 50�C and that this would the optimum temperature for the increase of the rate of browning as after this 50�C, the rate slowly starts to decrease but there is significant decrease in rate from 60�C to 70�C. The standard deviations here show that there is a large spread of data and shows us the difference between the estimated mean and the true value. ...read more.

Denaturation is the changing of the structure of an enzyme, so that it no longer can carry out its function and this change is usually a permanent one. The substrates bind to a special region on the surface of the enzyme called the active site. This active site, catalyses a chemical reaction involving substrates. Enzyme substrate specificity means most enzymes are specific, they catalyse only a few different reactions. There are only a small number of substrates. This means that if the enzyme denatures, then nothing can be replaced, the rate being measured shall decrease as the reaction can longer take place. As the temperature was increased, a number of bonds in the protein molecule were weakened. As these bonds were weakened and broken, the protein obtained a more flexible structure. If heating had ceases before 40�C, the protein would have been able to readily refold to its original structure. As heating continued, some of the hydrogen bonds that stabilized helical structure were broken. As these bonds are broken, water can interact with and form new hydrogen bonds with the amide nitrogen and carbonyl oxygens of the peptide bonds. The presence of water further weakens nearby hydrogen bonds. Additionally, as temperature increases beyond its optimum temperature, there are more collisions of particles due to an increase in kinetic energy provided (heat) within enzyme, and the speed of these collisions are extremely fast which also cause the enzyme to denature and change shape. In all, temperature affects the rate of browning to an extent, as the rate does increase with the temperature but does denature and hence stops the increase. The temperature that this enzyme works best at is between 40�C -50�C. However my conclusion is not extremely strong due to my inaccuracies that occurred during the experiment and my distinct anomalies. Structure of a Phenol enzyme 5 Word Count: 3,394 Words 1 fairfld61.files.wordpress.com/2010/08/bsaac1-6-enzymatic-browning.ppt 2 Polyphenol Oxidase Causes Browning of Fruits and Vegetables http://www.suite101.com/content/polyphenol-oxidase-causes-browning-of-fruits-and-vegetable-a243450#ixzz1E8GdAmFO 3 www.curriculumsupport.education.nsw.gov.au/.../apple_browning.pdf 4 Excel workbook formula 5 http://www.food-info.net/uk/colour/enzymaticbrowning.htm ?? ?? ?? ?? Research Question: How does temperature affect the rate of browning (enzymatic) in apple discs immersed in sucrose solution. ...read more.