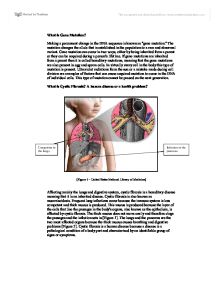 What is Gene Mutation? Making a permanent change in the DNA sequence is known as "gene mutation." The mutation changes the allele that is established in the population to a rare and abnormal variant. Gene mutation can occur in two ways, either by being inherited from a parent or they can be acquired during a person's lifetime. If gene mutations are inherited from a parent then it is called hereditary mutations, meaning that the gene mutations are also present in egg and sperm cells. In virtually every cell in the body this type of mutation is present. Ultraviolet radiations from the sun or a mistake made during cell division are examples of factors that can cause acquired mutation to occur in the DNA of individual cells. This type of mutation cannot be passed on the next generation. What is Cystic Fibrosis? A human disease or a health problem? [Figure 1 - United States National Library of Medicine] Affecting mainly the lungs and digestive system, cystic fibrosis is a hereditary disease meaning that it is an inherited disease. Cystic fibrosis is also known as mucoviscidosis. Frequent lung infections occur because the immune system is less competent and thick mucus is produced. ...read more.

This gene is necessary to produce sweat, digestive juices and mucus and its gene product functions as a chloride channel. In almost all people born with cystic fibrosis, one gene is received from each parent. If both parents have cystic fibrosis then the child has a 1 in 4 chance of having the disease. It is possible for doctors to perform tests during pregnancy so that parents can find out more about the chances that their child will have cystic fibrosis. What are the symptoms of Cystic Fibrosis? By the time a child is three years old they have usually been diagnosed by their doctor but if it is a milder form of cystic fibrosis then it is possible for it not to be diagnosed until the person reaches the teen years. [Figure 3 - Human Diseases and Conditions] Symptoms of Cystic Fibrosis: - Frequent lung infections [Figure 3] - Persistent cough - Persistent panting - Failure to gain weight - Small body size - Tiredness - Poor height growth - Frequent sinus infections - Toes and fingers may become rounded and enlarged [Figure 4 and 5] [Figure 4 - Podiatry Wordpress] [Figure 5 - Med Help] How common is Cystic Fibrosis? ...read more.

According to "Nemours Foundation," now 40% of cystic fibrosis carriers in the United States are 18 years or older. Since the identification of the gene that causes cystic fibrosis, scientists have been trying to replace abnormal cystic fibrosis genes with normal ones. Delivering the normal gene into the cell of a cystic fibrosis carrier is one of the methods that scientists are working on. Fighting lung infections and different ways of bypassing the defective protein is another method that scientists are experimenting with. Lung transplants have extended the lives of carriers in some cases. Gene therapy is the main research that is being conducted to find a cure. Current treatments aim to control the symptoms by improving nutrition to help digestion (enzyme therapy) and reducing chest infections with frequent physiotherapy. There is a range of other possible treatments: - Antibiotics to counter lung infections. - Dietary vitamin supplements (especially A, D and E). - Asthma therapy. - Insulin for diabetes. - Lung or heart and lung transplant operation. For people to overcome fertility problems counseling is recommended in order to help them cope with the psychological aspects of the illness. Children should be vaccinated against measles, mumps and rubella, diptheria, tetanus and whooping cough. They should also be vaccinated against flu and pneumococcus to help prevent chest infections. ...read more.