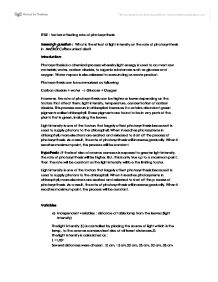 Ananas Comosus leaf has scattered distribution of chlorophylls while most of the chlorophylls is located at the under part and the rest at the upper part. Leaf disks are immersed in different orientation. Some of them are in upright position while the others are upside down. Thus, the rate of photosynthesis differs from one leaf to the other. All of the leaf disks immersed in the sodium hydrogen carbonate solution should have only one same orientation. In this case, we need to ensure that all of the lower parts of the discs face upward. Evaluation Conclusion When leaf discs are immersed in a sodium hydrogen carbonate solution (a source of carbon dioxide) and illuminated, the oxygen produced by photosynthesis causes the leaves to float. The time the leaves take to float can thus be used as an indirect measure of the rate of photosynthesis i.e. the more quickly flotation occurs, the faster the rate of photosynthesis. However this is true only until a certain point is reached. After the point is reached, the rate of photosynthesis will no longer increase but rather decrease. This is because there are other factors such as the denaturation of enzymes or cells. ...read more.