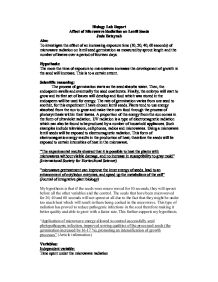 Biology Lab Report Affect of Microwave Radiation on Lentil Seeds Jude Batayneh Aim: To investigate the effect of an increasing exposure time (10, 20, 40, 60 seconds) of microwave radiation on lentil seed germination as measured by sprout length and the number of leaves over a period of fourteen days. Hypothesis: The more the time of exposure to microwaves increases the development of growth in the seed will increase. This is to a certain extent. Scientific reasoning: The process of germination starts as the seed absorbs water. Then, the endosperm swells and eventually the seed coat bursts. Finally, the embryo will start to grow and its first set of leaves will develop and food which was stored in the endosperm will be used for energy. The rate of germination varies from one seed to another, for this experiment I have chosen lentil seeds. Plants tend to use energy absorbed from the sun to grow and make their own food through the process of photosynthesis within their leaves. A proportion of the energy from the sun comes in the form of ultraviolet radiation. UV radiation is a type of electromagnetic radiation which can also be found to be produced by a number of household appliances. Such examples include televisions, cell phones, radios and microwaves. Using a microwave lentil seeds will be exposed to electromagnetic radiation. This form of electromagnetic energy results in the production of heat; therefore the seeds will be exposed to certain intensities of heat in the microwave. ...read more.

Microwave radiation does help the growth of lentil seeds and in fact speeds it up. However too much of the heat will result in cooking the seeds and therefore they will not grow as they are damaged. Sources of error and improvements Sources of error: * Some seeds in the control and 10 second groups did not grow even though their likes did. There are many explanations to that which are not related to microwave radiation. Two of these seeds were found in the control group. As for the 10 second group only one did not grow at all and another only germinated to 0.8cm and then stopped. Although a minor difference, this nevertheless may have affected the results one way or another * Most of the test groups did not grow which means that it was a mistake using this variation seeing as not much can be said from only the control and one successful attempt * The stems are curved, therefore some of the measurements may not be completely accurate * Transporting seeds from agar plate to plastic plate and when watering the seeds may have affected the growth. Improvements: * Check that there are no faults in the seeds chosen for the experiment and that can be done by checking growth after the third day; if no germination occurred when the rest of the seeds have then clearly there is a problem and the seed should be changed * Change the variation; instead of 10, 20, 40 and 60 seconds, used 5, 10, 15 and 20. * Take measurement of stem height several times and calculate average to assure more accuracy ...read more.