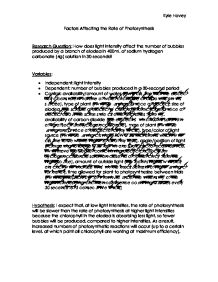 Factors Affecting the Rate of Photosynthesis Research Question: How does light intensity affect the number of bubbles produced by a branch of elodea in 400mL of sodium hydrogen carbonate (4g) solution in 30 seconds? Variables: * Independent: light intensity * Dependent: number of bubbles produced in a 30-second period * Control: availability/amount of water (I will assume that the elodea has a consistent volume of water available at all points on its surface), type of plant (I will be using a piece of elodea), size of elodea (the sample of elodea is a branch from a larger piece of elodea, about the same size as other branches from it), availability of carbon dioxide (the elodea is in a 400mL solution of 4g of sodium hydrogen carbonate), mass of plant (I will be using one piece of elodea for all my trials), type/color of light source (I will be using a single 40W bulb that emits what I will assume to be white light for all of my tests), angle/position of light (I am going to let the bulb rest in one spot, and for each test I do, I will move the beaker containing elodea and sodium hydrogen carbonate solution closer to or further away from the light source), amount of outside light (the ...read more.

I can tell that they are significantly different because the result (the comparison of the means of the two light intensities) of the t-test showed was higher than 2.78. So, it is with 95% confidence that I can say that the lowest-light-intensity-tested results were significantly different than the highest-light-intensity-tested results. As shown in the graph above, the rate of reaction increases steadily, until the light intensity reaches somewhere above 300 lux, at which point there is a much steeper slope in the graph. Also, as shown by the tests at 420 lux and 640 lux, the graph begins to plateau very quickly after the previous steep incline. This means that at a point around 300 lux, the photosynthetic reactions are very responsive to increased light intensities but at some point before 400 lux, increased light intensity bears less response. This means that the maximum photosynthetic rates were reached, or more likely, that some other factor limited the rate of reaction. Evaluation: Though I believe I had a successful experiment and obtained accurate results that supported my hypothesis and my knowledge of photosynthesis, there were numerous limitations and improvements that could be made to this experiment. ...read more.

If this happened, the results I obtained would be a little bit distorted. A solution to this limitation would be to do all the experimenting behind a poster board that blocks out as much ambient/background light as possible and to have students do experimenting in different rooms or areas. Oxygen used in plant respiration or dissolved into water Some of the oxygen produced may be used for other processes, including respiration or dissolving into the water. This would have only a very small effect on my experimenting and is impossible to control in an experiment where the plant is submerged in water. Replication In my experimenting, the time constraints and continuous modification of my experiments allowed me only to obtain three trials per light intensity and to do 5 different light intensity tests. The impact this has is that because of the relatively low amount of replication, the results are not extremely convincing, though there is evidence of support of my hypothesis. To help get rid of any anomalies and extend the range of data tested, this experiment could have been done with a wider range of light intensities and more trials per light intensity could have been performed. Kyle Hovey ...read more.