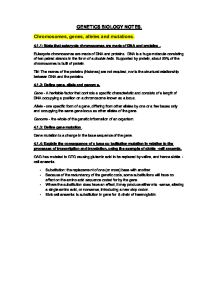 GENETICS BIOLOGY NOTES. Chromosomes, genes, alleles and mutations. 4.1.1: State that eukaryote chromosomes are made of DNA and proteins. Eukaryote chromosomes are made of DNA and proteins. DNA is a huge molecule consisting of two paired strands in the form of a double helix. Supported by protein, about 50% of the chromosomes is built of protein. TN: The names of the proteins (histones) are not required, nor is the structural relationship between DNA and the proteins. 4.1.2: Define gene, allele and genome. Gene - A heritable factor that controls a specific characteristic and consists of a length of DNA occupying a position on a chromosome known as a locus. Allele - one specific form of a gene, differing from other alleles by one or a few bases only and occupying the same gene locus as other alleles of the gene. Genome - the whole of the genetic information of an organism. 4.1.3: Define gene mutation. Gene mutation is a change in the base sequence of the gene. 4.1.4: Explain the consequence of a base substitution mutation in relation to the processes of transcription and translation, using the example of sickle-cell anaemia. GAG has mutated to GTG causing glutamic acid to be replaced by valine, and hence sickle-cell anaemia. - Substitution: the replacement of one (or more) base with another. - Because of the redundancy of the genetic code, some substitutions will have no effect on the amino acid sequence coded for by the gene. - Where the substitution does have an effect, it may produce either mis-sense, altering a single amino acid, or nonsense, introducing a new stop codon. - Sick cell anaemia: is substitution in gene for � chain of haemoglobin. Meiosis 4.2.1: State that meiosis is a reduction division of a diploid nucleus to form haploid nuclei In meiosis, four daughter cells are produced - each with half the number of chromosomes of the parent cell. ...read more.

gene 4.3.11: Predict that the genotypic and phenotypic ratios of offspring of monohybrid crosses involving any of the above patterns of inheritance. --- 4.3.12: Deduce the genotypes and phenotypes of individuals in pedigree charts. * Roman numeral identifies generation number * Arabic numeral identifies individual within a generation, numbering from left to right * square = male; circle = female * shaded = affected by genetic disorder or trait For dominant and recessive alleles, upper-case and lower-case letters, respectively, should be used. Letters representing alleles should be chosen with care to avoid confusion between upper and lower case. For codominance, the main letter should relate to the gene and the suffix to the allele, both uppercase. For example, red and white codominant flowers colours should be represented as CR and Cw respectively. For sickle-cell anaemia, Hb^ is normal and Hb' is sickle cell. Genetic Engineering and Biotechnology 4.4.1: Outline the use of polymerase chain reaction (PCR) to copy and amplify minute quantities of DNA. Polymerase chain reaction (PCR) is used when a research would like to investigate a certain DNA sequence. This sequence is 'photocopied' several times by using enzymes to replicate DNA, thus no living organisms are required. The DNA is heated to break the hydrogen bonds. Primers are added to start the process of DNA replication. Mixture is cooled and the primers bond to the original, but now single stranded DNA. Nucleotides and a thermostable DNA polymerase are added. The nucleotides will bond with the 'exposed' organic bases of the single stranded DNA then the DNA polymerase will then join them into a DNA strand. Through this, each of the original strands form a new complementary strand. These strands are heated and separated and will fnction as a template for more DNA strands to be formed. A large amount of identical copies of the original DNA can therefore be made quickly. 4.4.2: State that, in gel electrophoresis, fragments of DNA move in an electric field and are separated according to their size. ...read more.

10.2.5: Explain an example of a cross between two linked genes Example looking at the notation TtBb where it was used for non-linked dihybrid cross. To represent that it is linked, the two alleles must be represented as vertical pairs 10.2.6: Identify which of the offspring are recombinants in a dihybrid cross involving linked genes. Recombinants in linked genes are those combinations of genes which the parents DID NOT possess. Polygenic Inheritance 10.3.1: Define polygenic inheritance Polygenic inheritance is the inheritance of phenotypes that are determined by the collective effect of several genes. Discontinuous variation - there is no intermediate form and no overlap between the two phenotypes (i.e. two alleles for tall and dwarf plants.) You either have the characteristic or you don't. For example, blood groups because you can either have one blood group or another, nothing in between. Controlled by alleles of a SINGLE gene or a SMALL number of genes. Environment has little effect. Continuous variation - there is a complete range of measurements from on extreme to the other. It is the combined effect of many genes --> polygenic inheritance, and is often influenced by environmental factors. 10.3.2: Explain that polygenic inheritance can contribute to continuous variation using two examples, one of which must be human skin colour. Polygenic inheritance can contribute to continuous variation. Two examples of this is human skin colour and the seed colour of wheat. Seed colour of grain - this is controlled by 3 genes that interact together to control the phenotype. In this case, for all three of these genes there are only 2 alleles. Despite these limitations, the full range of colours obtained varies from dark red to white, with 5 shades of pink. Human skin colour - ranges from white, shades of brown to black. Colour of skin is due to pigment called melanin. Approx 3+ inherited genes control melanin production. The outcome is an almost continuous distribution from very pale (no alleles coding for melanin production) to very dark brown (all alleles for skin colour code for melanin production). ...read more.