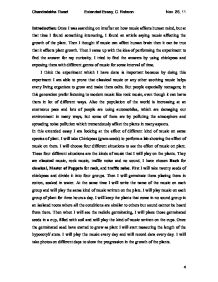 Music affecting the Plant Growth Introduction: Once I was searching on internet on how music affects human mind, but at that time I found something interesting, I found an article saying music affecting the growth of the plant. Then I thought if music can affect human brain then it can be true that it affects plant growth. Then I came up with the idea of performing the experiment to find the answer for my curiosity. I tried to find the answers by using chickpeas and exposing them with different genres of music for some interval of time. I think the experiment which I have done is important because by doing this experiment I am able to prove that classical music or any other soothing music helps every living organism to grow and make them calm. But people especially teenagers; in this generation prefer listening to modern music like rock music, even though it can harm them in lot of different ways. Also the population of the world is increasing at an enormous pace and lots of people are using automobiles, which are damaging our environment in many ways, but some of them are by polluting the atmosphere and spreading noise pollution which tremendously affect the plants in many aspects. In this extended essay I am looking at the effect of different kind of music on same species of plant. I will take Chickpeas (gram seeds) to perform a lab showing the effect of music on them. I will choose four different situations to see the effect of music on plant. These four different situations are the kinds of music that I will play on the plants. They are classical music, rock music, traffic noise and no sound. I have chosen Bach for classical, Master of Puppets for rock, and traffic noise. First I will take twenty seeds of chickpeas and divide it into four groups. ...read more.

7. The depth of the seed buried under the soil should be around 4cm. This will help us to reduce the errors because if the seeds are buried too deeply then their will be a shortage of oxygen supply to the seed. 8. All the plastic cups must have equal size and capacity. This will also help us in reducing uncertainties because if one cup is smaller than the other, then the amount of the nutrients will be different. 9. Before sowing any seed you should prepare the soil first. Soil must be termite free. This will prevent seed from being eaten by the termites. If soil has termites, then you should expose the soil in the sunlight for two- three days or use anti- termite. 10. To make the soil fertile we should add natural manure before sowing the seeds. This will increase the fertility and will help to increase the nutrients of the soil. 11. Soil should be raked before sowing the seeds and weeds should be removed from the soil. This will allow air to enter the soil. 12. You should moist the soil first before sowing the seeds. This will help seeds to sprout properly and fast. Hypothesis: I believe that plants will grow up more rapidly with the help of classical music followed by no sound, rock music and traffic sound. I think classical music will help the plant to grow faster because classical music creates a soothing effect which produces a hormone in plant cells that increases the height and weight of the plant. The vibrations or waves produced by this type of music are also responsible for the growth of the plants. At the same time rock music will hinder the plant's growth because sounds, with higher frequencies, in the form of physical waves have the tendency to collide with the objects, such as plants or plant cells, and damage them. ...read more.

length of any object with a ruler if there are any curves in it whereas threads can be twisted which will be very effective in measuring the curves in the plants. To make this experiment even better, I could have played the music for more weeks so that I can get a better conclusion. Also, I think that once the seeds were grown into plants, I could have transplanted them into the soil because the cups that were filled with soil did not contain as much nutrients as the soil. Also I could have tested the pH level of the soil because if the pH of the soil is not suitable for the beans then the plant would not grow properly. People can also think that the bad growth of the plant is because of the sound but in reality it is because of the soil. Another way to improve this experiment is by controlling the amount of air temperature. I forgot to maintain the room temperature constant; this might affect the growth of the plants, and might change the values of the length of the plants obtained, which might have affected average growth of the plants. In order to improve this I should have kept the temperature constant which would have helped me in getting more pr�cised results. Many think that air temperature does not play an important role in germination, but for plant to grow properly they need constant temperature and proper atmosphere. Plants will die if there is extreme temperature (or vast difference between the temperature of day and night). In order to protect them we should always try to maintain the temperature same while plant germination. I think I could have extended this experiment by finding the biomass of the plant because by finding the biomass, I can compare the amount of biomass produced by each category which can help me in understanding that which type of music can produce the most biomass which will again be helpful in WFP. ...read more.