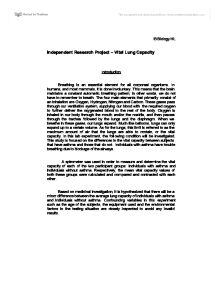 IB Biology HL Independent Research Project - Vital Lung Capacity Introduction Breathing is an essential element for all corporeal organisms. In humans, and most mammals, it is done involuntary. This means that the brain maintains a constant automatic breathing pattern; in other words, we do not have to remember to breath. The four main elements that primarily consist of an inhalation are Oxygen, Hydrogen, Nitrogen and Carbon. These gases pass through our ventilation system, supplying our blood with the required oxygen to further deliver the oxygenated blood to the rest of the body. Oxygen is inhaled in our body through the mouth and/or the nostrils, and then passes through the trachea followed by the lungs and the diaphragm. When we breathe in these gases, our lungs expand. Much like balloons, lungs can only expand up to a certain volume. As for the lungs, this limit is referred to as the maximum amount of air that the lungs are able to contain, or the vital capacity. In this lab experiment, the following condition will be investigated. This study is focused on the differences in the vital capacity between subjects that have asthma and those that do not. Individuals with asthma have trouble breathing due to blockage of the airways. ...read more.

The maximum trial was used to calculate the total average of asthmatic afflicted contributors. Like numerous measurement devises, the uncertainty is the smallest division possible (instrumental uncertainty), which is 0.1. Sample Calculation The mean of participants who had asthma: Mean = (2.3+2.3+3.0+2.9+3.3) / 5 Mean = (13.8) / 5 Mean = 2.76 The mean of participants who didn't have asthma: Mean = (2.9+3.5+3.3+3.4+3.3) / 5 Mean = (16.4) / 5 Mean = 2.76 Data Presentation Figure 3: The comparison between the average vital capacity of asthmatic and non asthmatic participants. Figure 3: The data shows the relationship between non asthmatic and asthmatic afflicted participants. There is not much of a difference, but it is still clear that the non asthmatic participants do in fact have a higher mean. Unpaired t test results The following is an unpaired t-test calculated using graphpad.com and its Quick Calcs function. P value and statistical significance: The two-tailed P value equals 0.0485 By conventional criteria, this difference is considered to be statistically significant. Confidence interval: The mean of Asthmatic Participants minus Non-Asthmatic Participants equals -0.520 95% confidence interval of this difference: From -1.036 to -0.004 Intermediate values used in calculations: t = 2.3255 df = 8 standard error of difference = 0.224 Data: Group Asthmatic Participants Non-Asthmatic Participants Mean 2.760 3.280 SD 0.445 0.228 SEM 0.199 0.102 N 5 5 The degree of freedom of 8 and the P-value of 0.485 conclude that the null hypothesis can be accepted. ...read more.

airways which could lead to changing the end result. Another solution so such limitations would be to include an aerobic aspect into the procedure, which would be able to somewhat identify the level of severity of an individual's asthmatic symptoms. Another limitation that could of have affected this lab experiment was the time of day in which each of the trials were recorded. Depending on the time of day, individuals might of have had different levels of energy and some might even of have had done physical exercise prior to the experiment. This could of have affected the result because of the correlation between psychical activity and the vital capacity measurements. Vital capacity is increased and strengthened after physical activity and the rate of breathing also is increased depending on the different energy outputs. This issue could be easily solved in only allowing participants to record their measurements on a certain time of day, making it a controlled variable. Lastly, height is a factory that affects the vital capacity of the lungs. Height and vital capacity share a positive correlation, meaning that the taller and individual is, the higher the vital capacity will be. One way to fix this problem would be to spend more time in choosing the participants, having them measured in height before getting their vital capacity measured. ...read more.