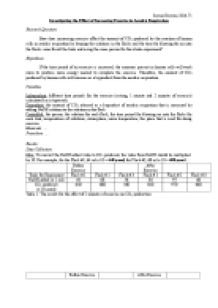 Investigating the Effect of Increasing Exercise in Aerobic Respiration

ï»¿Sercan DurmuÅ 10/A 71 Investigating the Effect of Increasing Exercise in Aerobic Respiration Research Question: How does increasing exercise affect the amount of CO2 produced by the reaction of human cells in aerobic respiration by keeping the solutions in the flasks and the time for blowing the air into the flasks same for all the trials and using the same person for the whole experiment? Hypothesis: If the time period of an exercise is increased, the enzymes present in human cells will work more to produce more energy needed to complete the exercise. Therefore, the amount of CO2 produced by human cells will increase as a byproduct from the aerobic respiration. Variables: Independent: different time periods for the exercise (resting, 1 minute and 2 minutes of exercise) calculated by a stopwatch. Dependent: the amount of CO2 released as a byproduct of aerobic respiration that is measured by adding NaOH solution to the solution in the flask Controlled: the person, the solution for each flask, the time period for blowing air into the flasks for each trial, temperatures of solutions, atmosphere, room temperature, the place that is used for doing exercise Materials: … Procedure: … Results: Data Collection: Note: To convert the NaOH added value to CO2 produced, the value from NaOH should be multiplied by 10. ...read more.

Most significantly, the multiple trials of the experiment cannot be ignored in order to gain more accurate results. Also, to be able to compare the effect of different periods of exercises on CO2 production, more time periods are needed. For example, three and four minutes of exercises? effects could be measured to get a better graph to see the overall CO2 produced for each period of exercise. Conclusion: There is an increase in the value of CO2 produced while the time period of the exercise increases. The biggest amount of CO2 was released after two minutes of exercise. Therefore, the result of this experiment supports part of the hypothesis, which states that if the duration of the exercise is increased, the energy requirement of a person will increase, therefore, the rate of the reaction will be increased and CO2 will be produced more. Sources: Aerobic Respiration. Campbell, Neil A., Biology: Concepts and Connections, Pearson: San Francisco, 2006 Answer. ?What effect would exercise have on the amount of carbon dioxide made in respiration?? Oct 28, 2012: http://wiki.answers.com/Q/What_effect_would_exercise_have_on_the_amount_of_carbon_dioxide_made_in_respiration Formula. ?How do you calculate uncertainty when taking an average of something?? Nov 11, 2012: http://answers.yahoo.com/question/index?qid=20060913185845AAW9s1M Live Strong. DiMenna, Fred. ?What Effect does Exercise Have on the Amount of Carbon Dioxide Released by the Blood?? Oct 28, Aug 23, 2011: http://www.livestrong.com/article/524672-what-effect-does-exercise-have-on-the-amount-of-carbon-dioxide-released-by-the-blood/ ...read more.