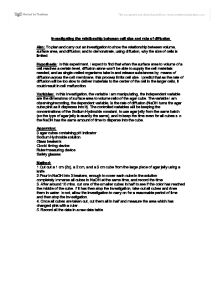 Investigating the relationship between cell size and rate of diffusion

Investigating the relationship between cell size and rate of diffusion Aim: To plan and carry out an investigation to show the relationship between volume, surface area, and diffusion; and to demonstrate, using diffusion, why the size of cells is limited. Hypothesis: In this experiment, I expect to find that when the surface area to volume of a cell reaches a certain level, diffusion alone won't be able to supply the cell materials needed, and as single-celled organisms take in and release substances by means of diffusion across the cell membrane, this process limits cell size. I predict that as the rate of diffusion will be too slow to deliver materials to the center of the cell in the larger cells, it could result in cell malfunction. ...read more.

When cells grow to a certain size, their rate of growth slows down until they have stopped growing completely (restrains cell size). Once a cell has reached its size limit, and when one of the larger cells divide into smaller ones, the rate of growth again increases. So generally, the relationship between the rate of diffusion and cell size is that the rate of diffusion stays the same, but as all the cells are small, diffusion occurs quicker throughout the cells, than in larger cells. Even though we used agar jelly containing pH indicator to represent a cell and NaOH to represent the state of simple diffusion, this really is the process that occurs millions of thousands of times in our bodies. As the single-celled organisms take in and release substances by means of diffusion across the cell membrane which is important to their successful function, this is the reason that there is a limit to cell size. ...read more.

**
The investigation does not really address the central question of the effect of surface area to volume ratio in enough detail.

Too much focus is placed on the calculation of the surface area to volume ratio and its relationship with the size of the cube.

The data from the experiment is missing.

The discussion does approach the reason why a high surface area to volume ratio is important as it allows faster diffusion rates which is vital for cell functioning. It does not really explain that the more surface area that is available compared to volume means that there is more of its volume exposed to the outside environment and that this increases diffusion rate.