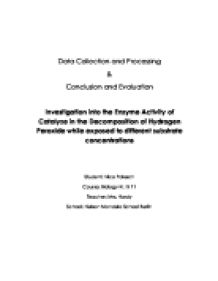 Data Collection and Processing & Conclusion and Evaluation Investigation into the Enzyme Activity of Catalyze in the Decomposition of Hydrogen Peroxide while exposed to different substrate concentrations Student: Nico Palesch Course: Biology HL IB 11 Teacher: Mrs. Hardy School: Nelson Mandela School Berlin Procedure Background In this pre-designed procedure the enzyme activity of catalase in a potato was tested, in the form of measuring the volume of the Oxygen (O2) released by a catalase - hydrogen peroxide (H2O2) reaction in the span of one minute. The more oxygen released by the reaction the higher the enzyme activity was assumed to be, as more of the product was released in the same period of time. The variable to be tested was the substrate concentration of the reaction, in this case the hydrogen peroxide. In each set of trials more hydrogen peroxide was added to the reaction, in order to increase the substrate concentration, but in each set the time limit was strictly one minute (+/- 0.1 miliseconds), to make sure that the resulting oxygen volume was a reflection of the enzyme activity, and not simply a reflection of the amount of hydrogen peroxide acted upon. ...read more.

Qualitative Data - In set one, where 0.50 ml of hydrogen peroxide was added, the column of oxygen rose unevenly, as the bubbles rise faster on one side of the cylinder than the other. - In all sets the color of the middle of the column of oxygen was a distinct yellow, and at both the top and bottom ends was a faded orange. - The more hydrogen peroxide used in each trial, the faster the column would rise. - Initially, in approximately the first 5 seconds after adding the hydrogen peroxide, the column of oxygen bubbles rose minimally. After this first phase the rate would speed up, and consistently rise at the same pace until about a minute had gone by, at which point the rate of rising fell again. - After the reaction had taken place the pieces of potato used remained intact, but the surface consistently turned black. Calculating the Average As can be seen in the above table, for each set of 5 trials with a different amount of hydrogen peroxide used there were 5 separate, and usually similar results. ...read more.

Therefore, the calculations for Set 4 looked like this: 35 + 37 + 34 + 33 = 139 139 : 4 = 34.75 � 34.8 Calculating the Standard Deviation The next step in the statistical analysis of the data was to find the Standard Deviation (SD) of each set of trials. The reason for finding the SD is to be able to see how much the results tend to diverge from the average, and therefore be able to see how accurate and consistent your results are. If there is a small SD it means the results tend to be close to the average result, meaning that they are all relatively close together. If the SD is a large number, it means the results are far away from each other, meaning your results are not that consistent. In order to find the SD I used the following formula: The following table shows the standard deviation of the different sets of trials. Amount of Hydrogen Peroxide (ml +/- 0.05 ml) used in Set of Trials Standard Deviation of the Set of Trials 0.50 1.1 0.75 2.04 1.00 1.7 1.25 1.7 1.50 2.5 ...read more.