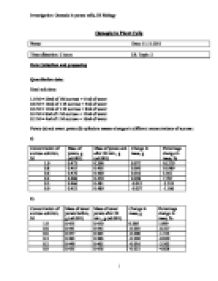 Osmosis. By this investigation, I tried to find out the changes in potato cylinders masses dependently on sucrose solution

The same water potential means no change in mass of potato cylinder. Any of my tested cylinders left the same as before. If we look at the trend line in the graph, we can find the most possible concentration. * The same water potential as potato: 0.3 M sucrose * The same water potential as sweet potato: 0.8 M sucrose As I've already said before, my results are very not precise. I can say that because not all points are lying on the trade line. Therefore, I may do assumption, that there are a lot of errors in this investigation. First of all, we didn't do any replications and that lowers this data's confidence and reliability. The highest deviation, as we can see from the graphs, appeared in 0.4 M sucrose solution with both types of potato. If it had happened only with one of two types of potato, I would say that it's possibly because of wrong measured mass. But now, there are mistakes in both types and therefore I think that the problem was in solution. I think that I put too little water or too much sucrose while making 0.4 M solution, thus water potential in it got lower and caused lower osmosis to potato. Therefore, mass after got lower than it should be and percentage difference in mass increased. ...read more.

Therefore it's not always objective to compare results with literature or other's value. In this particular investigation, potato may were grown under the different circumstances, had different concentration of sucrose inside and different water potential. I've mentioned quite a lot of errors, both systematic and random. That shows that this investigation wasn't perfect and it can be improved a lot. First of all, as all investigations, this one requires a lot of attentiveness. On purpose to achieve better results, all the steps should be done very carefully, precisely. Especially, making solutions and measuring all masses. For being more precise in making solutions, it's better to use the same size tube-pipes because now it was really hard to be sure that all the solutions are made right because volumes looked different. Moreover, it is very important to be sure about measuring right initial and final masses. I'm pretty sure that initial masses were measured correctly, unless there appeared random errors as just recording wrong digits. On the other hand, I think that there were errors in recording final mass. To eliminate these errors, it's very important to make sure that while measuring final mass, there's no additional water on potato cylinders, which could change final results (by decreasing percentage change in mass). Finally, as I have already mentioned before, almost all errors can be eliminated by just increasing level of meticulous in every step of investigation. ?? ?? ?? ?? Investigation: Osmosis in potato cells, IB Biology 1 ...read more.