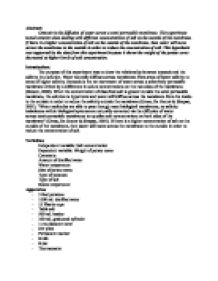 Potato IA Lab. This experiment tested osmosis when dealing with different concentrations of salt on the outside of the membrane.

This experiment could have been improved by using a more accurate scale. An electronic scale might have been able to measure the salt more precisely. Also, the excess moisture of the potatoes was taken off after they sat in the solution by blotting them on a paper towel. There was no way to measure this, and some potato cores may have had more moisture taken off than others, skewing results. However, I do not believe this would have affected the results enough to change the conclusion that the hypothesis was supported by this experiment. I would be interested to test how different types of salt, such as sea salt or kosher salt, affect the osmosis in potato membranes. I would like to redo my first group of 0.0 M solution because 2 of the results from those cups were abnormal and unexpected. While 3 of the cups gained a little bit of weight (approximately .2 g), 2 of the cups lost .6 g of weight. This seems very inconsistent and it leads me to believe that I made an error in my tests. Acknowledgements: I would like to thank my mother for purchasing the potatoes, cups, and distilled water. I would also like to thank my friends for their support. Literature Cited: Gross, C., De Zeeuw, J., & Simpao, T. (2001, April 27). Awesome Osmosis. Retrieved from http://marinediscovery.arizona.edu/lessonsS01/blennies/2.html Bowen, R. (2000, July 02). Portrait of a cell. Retrieved from http://www.vivo.colostate.edu/hbooks/cmb/cells/pmemb/osmosis.html ...read more.