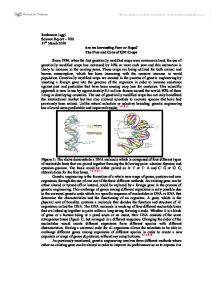 Pros and Cons of GMO crops

Rashmeen Jaggi Science Report - 10B 11th March 2010 Are we harvesting Fear or Hope? The Pros and Cons of GM Crops Since 1996, when the first genetically modified crops were commercialized, the use of genetically modified crops has increased by 10% or more each year and this estimation is likely to increase in the coming years. These crops are being utilized for both animal and human consumption, which has been increasing with the massive increase in world population. Genetically modified crops are created in the process of genetic engineering by inserting a foreign gene into the genome of the organism in order to increase resistance against pest and pesticides that have been causing crop loss for centuries. This scientific approach is now in use by approximately 8.5 million famers around the world; 90% of them living in developing countries. The use of genetically modified crops has not only benefitted the international market but has also allowed scientists to recreate species that have had previously been extinct. Unlike natural selection or selective breeding, genetic engineering has allowed more predictable and improved results. 7, 8 & 12 Figure 1: The above demonstrate a DNA molecule which is composed of four different types of nucleotide basis that are paired together forming the following pairs: adenine-thymine and cytosine-guanine. The basis could be either paired as A: T or T: A and C: G or G: C; abbreviations for the four bases. 14, 16 & 17 Genetic engineering is the formation of a whole new range of genes, proteins and new organisms, through the use of one out of the three different methods. An existing gene can be either altered or turned off or instead, could be replaced by a foreign gene in the process of genetic engineering. This exchange of genes among different organisms is only possible due to the universal genetic code which is a specific sequence of nucleotides in DNA or RNA that determine the characteristics and the functioning of an organism. ...read more.

The intestine of the pest ruptures, when the toxin known as Bt is ingested. Consumption of these crops only leads to death of pests; it is ineffective towards humans and other animals. 15 Genetic engineering has been criticized since it came into action. Excuses used against this technology engage topics such as humans should not be transforming other organisms or biotechnologists are playing god. However no one has acknowledged how successful genetic engineering has been in addressing specific local and global issues. Genetic engineering aims to create crops which are better resistant to pests, pesticides, diseases and extreme climatic conditions. These types of crops are capable of growing among poisonous pests and in harsh circumstances. For example, Bt-enhanced plants contain genes that are deadly to the pests. Instead of wasteful and expensive spraying of toxic pesticides that harm crops, the pests will contain the genes of Bacillus thuringiensis (Bt). After tasting the crop, the pest will then go off and in a period of less than 30 hours, it will die. Figure 4 explains how Bt-corn, a Bt-enhanced plant, could lead to killing of pests. The use of Bt-enhanced crops has saved 10 times more than the crops saved earlier. The use of better resistant crops has lead to an increase in the amount of produce. The decrease in crop loss has caused the productivity to increase which in turn has lead to financial growth and economic growth. Their use of such a technique is not only beneficial for the food industries but also for the population and with the increase in productivity, it is now easier to keep up with the hunger of the massive population growth. 6, 5 & 15 As stated earlier, genetic engineering is a controversial subject with its own benefits and limitations. One of the benefits of genetic engineering would be reduce in the costs of production. The increase in productivity has lead to a decrease in the price of goods. ...read more.

It's poverty..." In her point of view, the better approach to decreasing hunger would be that people could buy food that will give a well-balanced diet. Instead of having one food containing all the required nutrients, they should be able to buy different diets to fulfill their requirements. She finds is pointless to apply biotechnology to a variety of problems when there are many simple, practical and feasible alternatives. For example, she discuses how edible vaccines that supposedly are safe, could also cause death. She says " how are you going to be sure, say, if an edible vaccine is in bananas, that someone doesn't overdose on vaccines by eating too many bananas?...but I do see people perhaps overlooking more practical but less sensational solutions to very important problems..." She argues about how the idea of edible vaccine is not necessarily beneficial and could have severe outcomes. From her point of view, genetic engineering is strong technology that could change how the world functions and could lead to various successful outcomes. However, she is concerned about the negative outcomes of this technology as is fairly new and has not been monitored for very long. She suggests limited use of genetic engineering. 9 & 1 0 Genetic engineering is one of the most controversial issues which has been and will continue to be raised in media. This process has not only helped creating bug resistant crops but has also benefitted the society economically and socially. This technology is considered one of the healthiest technologies that have recently been discovered. Some scientists agree whereas some disagree with the use of genetic engineering as its use can either be advantageous or disadvantageous, depending on the perspective of the individual. Genetic engineering has proven to be successful at the very moment, however scientists argue about, if, its negative outcomes are long term impacts. They are skeptical about whether it would generate troubles that develop over a longer period of time. Moreover, they are concerned about the ecosystem and the functioning of the world as the consequences of genetic engineering are not necessarily safe. ...read more.