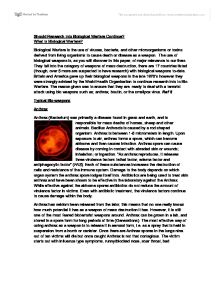 Should Research Into Biological Warfare Continue? What Is Biological Warfare? Biological Warfare is the use of viruses, bacteria, and other microorganisms or toxins derived from living organisms to cause death or disease as a weapon. The use of biological weapons is, as you will discover in this paper, of major relevance to our lives. They fall into the category of weapons of mass destruction, there are 17 countries listed (though, over 5 more are suspected to have research) with biological weapons to-date. Britain and America gave up their biological weapons in the late 1970's however they were strongly advised by the World Health Organisation to continue research into to Bio Warfare. The reason given was to ensure that they are ready to deal with a terrorist attack using bio weapons such as; anthrax, boutin, or the smallpox virus. Ref 6 Typical Bio-weapons Anthrax Anthrax (Bacterium) was primarily a disease found in grass and earth, and is responsible for mass deaths of horses, sheep and other animals. Bacillus Anthracis is caused by a rod shaped organism. Anthrax is between 1-5 micrometers in length. Upon exposure to air, anthrax forms a spore, which can become airborne and then causes infection. Anthrax spore can cause disease by coming in contact with abraded skin or wounds; inhalation; or ingestion. "As anthrax reproduces, it releases three virulence factors: lethal factor, edema factor and antiphagocytic factor" (FAS). Each of these substances increases the destruction of cells and resistance of the immune system. Damage to the body depends on which organ system the anthrax spore lodges itself into. Antibiotics are being used to treat skin anthrax and have been shown to be effective in the laboratory against the Anthrax. ...read more.

Permanent effects will be, scarring, blindness, arthritis and internal bleeding. The mortality rate of small pox is over 95%. Treatment for Smallpox is scarce; many vaccines have unacceptable side effects. Ref 1, 4 Fluids are administered to patients to make them more comfortable, and help them through to the last stage of Smallpox. Euthanasia is a common wish among Smallpox's victims. Some health experts think that Smallpox was responsible for more human deaths then all other diseases put together. The Soviet Union, 1980-mid 1990's, created a strand of Smallpox variola that caused death within 4 days as opposed to the usual 15. Smallpox is no longer organic; it must be obtained from a Lab or produced in a complicated procedure with an incubated chicken egg, by circulating different cells to get a correct mutation. However, Small Pox is also relatively cheap to produce. As a result it is always kept at Level 4 (the highest) Lab security in the US and UK. Ref 1, 4, 6 Where Does Research Continue In The UK? The British MoD have there own research centre for Chemical, Biological, Nuclear, and Radiological (CBNR) warfare. This research centre is called Porton Down and is situated north of Porton near Salisbury Plain. When the organisation was first set up there were only a few cottages on the Down at Porton, there is now a vast military camp. Over 1000 ranks and officials pass through the guarded gates every few days. The essential idea behind Porton is that it practises research into Chemical Biological Nuclear Radiological warfare. The Laboratories are some of the few of which contain inorganic diseases (Such as Smallpox), this means that Britain has the means to manufacture and use Biological weapons, hence one of the issues connected to research into Biological warfare. ...read more.

What is the point? The Pro's And Cons Of Continuing Biological Weapons Research. My Conclusions It is very clear that Bio Weapons are extremely dangerous weapons of mass destruction. They are easy for other countries to manufacture, especially third world countries. This means they can easily get into the hands of, or are made by Terrorists. All that is needed is a shed to start growing potential weapons of mass destruction. Primarily a Government is there to protect and serve its people, the Government of this country has a duty to prepare and protect its army and its people to these threats. In continuing Biological Weapons research it can give benefits into medicines, lots of other diseases and give other scientific benefits, there is lots of potential. This research also gives the Government a Biological Weapon capability, which can act as a deterrent. However should we continue this research? Would our government abuse this power, like other governments and powerful tyrants in the past have done. For example Saddam Hussein used nerve Gas on the Iranians during the Iran and Iraq war and on his own people and US and British troops during the more recent Iraq war. So the danger of these biological weapons being used upon members of our commonwealth is a real threat. This evidence suggests we should keep research into biological weapons. However, there are yet more arguments against. For example what would happen if our research specimen escaped into the country or cities by accident, this, in fact, did happen when the foot and mouth virus accidently escaped into the Surrey countryside. Porton Down was put under a lot of criticism from the press. (Example sourced from The Guardian). There is a problem with all the sources I have used to gain information about Biological Warfare. Largely the Biological Warfare information is kept secret. ...read more.