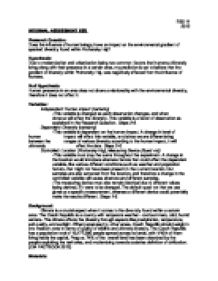 Research Question: Does the influence of human beings, have an impact on the environmental gradient of species diversity found within Pruhonsky Haj?

ESS 11 2012 INTERNAL ASSESSMENT ESS Research Question: Does the influence of human beings, have an impact on the environmental gradient of species' diversity found within Pruhonsky Haj? Hypothesis: Due to modernization and urbanization being two common factors that humans ultimately bring along with their presence in a certain area, my prediction is set to believe that the gradient of diversity within Pruhonsky Haj, was negatively affected from the influence of humans. Null Hypothesis: Human presence in an area does not share a relationship with the environmental diversity, therefore it does not affect it. Variables[1]: Independent: Human impact (certainty) -This variable is changed as each observation changes, and when done so will affect the diversity. This variable is a factor of observation as explained in the Research Question. ...read more.

The default quad-rat that we use gives us a specific measurement, whereas a different device could potentially make the results different. Steps 1-8. Background: Climate is a crucial aspect when it comes to the diversity found within a certain area. The Czech Republic is a country with temperate weather- cool summers, cold, humid winters- The climate affects the diversity through aspects like precipitation, temperature, soil quality, and sunlight. When juxtaposed to other areas, Czech Republic should weigh in into medium zone in terms of quality of wildlife and ultimate diversity. The Czech Republic has a population total of 10,177,000 people spread across its lands, with 1/10th of them living inside the capital, Prague. 74% of the overall land has been urbanized by the people exploiting the territories, and modernizing towards societies definition of civilization. ...read more.

To measure using a quad-rat, plant your squared device on the ground. ii. Plot down how many different species you found in your quad-rat according to where you are on the human activity slope. In the end your graph should look something like this (results are for exemplary purposes only): 7. Now that you have your final results, compare each of your sections together (you should have 20). 8. Compare the change in diversity from your measurements as they go from one side of the slope to the other by seeing how the number of different species change as the slope changes. Sources cited: Factbook, CIA World. "Czech Republic." CIA World Factbook. US GOV, 20 Mar. 2012. Web. 26 Mar. 2012. <https://www.cia.gov/library/publications/ the-world-factbook/geos/ez.html>. [1] Very good listing and explaining! [2] You should normally add more than one Controlled variable. ...read more.