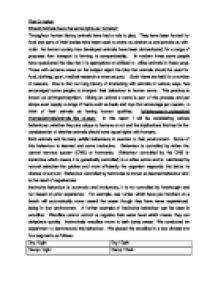 Should Animals have the same rights as Humans? Both animals and humans exhibit behaviours in reaction to their environment. Some of this behaviour is learned and some instinctive.

Finn O Hurley Should Animals have the same rights as Humans? Throughout human history animals have had a role to play. They have been hunted for food and parts of their bodies have been used to clothe us, shelter us and provide us with tools. As human society has developed animals have been domesticated for a range of purposes from transport to farming to companionship. In modern times some people have questioned the idea that it is appropriate or civilised to utilise animals in these ways. Those with extreme views on the subject reject the idea that animals should be used for food, clothing, sport, medical research or even as pets. Such views are held for a number of reasons. One is that our long history of interacting with animals in various ways has encouraged some people to interpret their behaviour in human terms. This practice is known as anthropomorphism. Giving an animal a name is part of this process and pet shops even supply a range of items such as beds and toys that encourage pet owners to think of their animals as having human qualities. britishmuseum.org/explore/ themes/animals/animals_like_us.aspx In this report I will be considering various behaviours, whether they are unique to humans or not and the implications this has for the consideration of whether animals should have equal rights with humans. Both animals and humans exhibit behaviours in reaction to their environment. Some of this behaviour is learned and some instinctive. Behaviour is controlled by either the central nervous system (CNS) or hormones. Behaviour controlled by the CNS is instinctive which means it is genetically controlled, is a reflex action and is reinforced by natural selection-the quicker and more efficiently the organism responds the better its chance of survival. Behaviour controlled by hormones is known as learned behaviour and is the result of experiences. Instinctive behaviour is automatic and involuntary, it is not controlled by forethought and not based on prior experience. ...read more.

This time repeated exposure to a stimulus leads to decreased response. Habituation prevents animals from wasting energy by reacting to a stimulus which may, for example, appear dangerous when it is not harmful. It helps us to distinguish between meaningful stimuli which we must respond to in order to secure our continued survival and stimuli that are irrelevant or not harmful. This can be seen in birds. Birds may see a scarecrow as being harmful to them but when one bird flies close to the scarecrow and the scarecrow does not react, other birds soon learn that the scarecrow presents no threat to them. Habituation can also be seen in humans. When we first put on clothes we are aware of how they feel. However, after a short time the stimulus those clothes create disappears, we are no longer aware of them (unless they are made of unusually uncomfortable fabric). This means we do not waste energy needed for more important functions reacting to the stimulus of our clothes. Courtship behaviour is behaviour that results in mating and reproduction and is therefore essential to survival. It can consist of simple visual, auditory or chemical stimuli or it can be a complicated series of acts using a variety of methods of communication. Wild peacocks use auditory stimuli such as calls and visual stimuli such as displays of their tail feathers to attract females to territories they establish during the mating season. The peahen makes her selection using the number of eye spots and size and brilliance of the tail feathers, these indicate the strength and health of the bird and his suitability as a mate who is likely to pass on his characteristics to his young. Bowerbirds have very complex courtship behaviour. The males build a 'bower' to attract a mate. The bower is a kind of shelter which is then decorated with brightly coloured objects collected by the male. ...read more.

Cohen argues only humans have this capacity, they are moral beings. Animals on the other hand are amoral. Cohen points out that this does not imply we can treat animals any way we want. We are obliged to act in a certain way toward animals because we understand the implications of our actions. So whereas it might not be in a human's interest to exercise their dog in a spell of bad weather, that human is obliged to do so because they know that if this does not happen the dog will become unhealthy. Cohen defends the use of animals in bio-medical research using the principle of greatest utility; that is that the well being of those who benefit from the medical research far outweighs the pain of the subjects. Furthermore, he contends that the suspension of all medical research involving animals would lead to the suffering of potentially hundreds of thousands of people who would otherwise benefit from the research in the future. He claims medical research must continue but in as humane a way as possible. It is certainly true that without animal testing many of the medicines and procedures that countless thousands of people benefit from today would not exist and the development of future treatments would be badly limited. Such treatments and procedures include organ transplants, open heart surgery techniques, the development of vaccines, antibiotics, contraceptives and IVF treatment, the ability to measure blood pressure, the development of pacemakers and heart/lung machines. Furthermore, animal testing benefits other animals, for example the nutritional needs of cats and dogs are now much better understood as a result of animal research and as a result pet food manufacturers can produce food mixes that enable animals to live longer and healthier lives. Pet vaccines and treatments to alleviate the suffering of animals have also resulted from animal research. Banning or restricting animal research as a result of the extension to animals of human rights would limit the human potential to relieve suffering and pain in all animals, not just humans. ...read more.