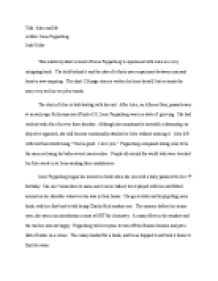 Talking Parrot - review of &quot;Alex and Me&quot; by Irene Pepperberg

﻿Title: Alex and Me Author: Irene Pepperberg Josh Keller This relatively short recount of Irene Pepperberg?s experiment with Alex is a very intriguing book. The truth behind it and the idea of a thirty year experiment between man and beast is awe-inspiring. The short 226 page story is written by Irene herself, but recounts the story very well in very few words. The story of Alex is told starting with his end. After Alex, an African Gray, passed away at an early age for his species of bird at 31, Irene Pepperberg was in a state of grieving. She had worked with Alex for over three decades. Although she maintained a scientific relationship, an objective approach, she still became emotionally attached to Alex without noticing it. Alex left with his final words being ?You be good. I love you.? Pepperberg compared losing Alex to be the same as losing her baby several years earlier. ...read more.

Different objects and colors were taught to Alex as well as the understanding that saying ?no? meant he didn?t want to cooperate or do something. A breakthrough in proving thought not just mimicry was when Pepperberg showed him clothes pegs, and after a while changed that color to green. He identified it as ?green wood peg wood? without learning to connect green and peg wood, what he called the clothes pegs. Showing the connection of two separate phrases displays that he is considering his options, not just reacting to cues. A breakthrough in this experiment came when he began to learn ?same? and ?different? descriptions. After several stressful moves and applying for several grants, Pepperberg finally was given a grant for her research. Meanwhile, Alex had spores in his lungs that sent him to the vet, which at the time didn?t know much about treating these spores. A new medical treatment was not effective on healing Alex, so Pepperberg decided to get Alex surgery to scrape out the spores. ...read more.

He taught society the true capabilities of birds, further than ever imagined. He passed away only halfway through his expected life span. Alex did not even reach his full potential. I believe anyone who has a passion for science or even just has a pet should read this book. This book confirms what pet owners already know about their ?babies.? They are very intelligent. The most touching quote is one spoken by Alex himself the night before he passed. When Irene left, Alex chirped, ?You be good, I love you.? This explains basically all of what Pepperberg was trying to prove- animals have cognitive abilities. I feel that this novel is a very accurate account of what animals can achieve and the level of hidden intelligence a lot of them already have. The reader who is looking for a quick read is not the right person for this book. On the other hand, this book is very informative and is very heartwarming. Alex and Me is a very well written book, it is worth the slow read. ...read more.