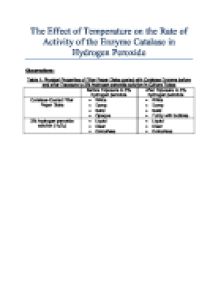 The Effect of Temperature on the Rate of Activity of the Enzyme Catalase in Hydrogen Peroxide Experiment.

into the 3% hydrogen peroxide solution before the culture tube was inverted. This caused the production of oxygen (bubbles) to happen sooner and since both sides of the filter paper disks are reacting in the beginning (as compared to only one side reacting at the beginning until it somewhat rises into the 3% hydrogen peroxide solution) it resulted in a decrease in amount of time taken to rise to them top of 3% hydrogen peroxide solution which increases relative reaction rate of the enzyme catalase. To fix this, dip only one paper filter paper disk into catalase enzyme solution at a time, and tap each side carefully using tweezers on paper towel and immediately place onto rubber stopper so they are still sticky. The enzyme catalase extract solution was obtained from a beaker. For the temperatures of 40�C, 60�C and 80�C the beakers were placed on hot plates to keep the temperature consistent. Since the beakers were left on the hot plates for a while, at high temperatures especially the 80�C condition, the water in the solution of the enzyme catalase can begin to evaporate and thus increasing the enzyme concentration in the solution. This causes the relative rate of enzyme activity of catalase to increase (meaning takes less time to flout to top of 3% hydrogen peroxide solution) as there are more enzymes to decompose hydrogen peroxide for the 40�C, 60�C and 80�C temperature conditions. To fix this problem, heat up the catalase enzyme extract solution to the desired temperature condition and use that catalase enzyme extract solution immediately to minimize evaporating of water. ...read more.