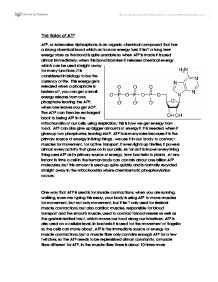 The Roles of ATP

The Roles of ATP ATP, or Adenosine triphosphate, is an organic chemical compound that has a strong chemical bond which acts as an energy fuel, it isn't a long term energy store as the bond is quite unstable so when ATP is made it is used almost immediately, when this bond is broken it releases chemical energy which can be used straight away for many functions, it is considered in biology to be the currency of life. This energy gets released when a phosphate is broken off, you can get a small energy release from one phosphate leaving the ATP; when one leaves you get ADP. The ADP can then be recharged back to being ATP in the mitochondria of our cells, using respiration; this is how we get energy from food. ATP can also give up bigger amounts of energy if it is needed, when it gives up two phosphates, leaving AMP. ATP has many roles because it is the primary source of energy in living things , we use it in our body to contract muscles for movement, for active transport, it even lights up fireflies, it powers almost every activity that goes on in our cells. ...read more.

Aerobic respiration is used to create a constant yield of ATP when you undergo exercise; this is why you need to breathe more deeply during exercise as anaerobic respiration requires a steady source of oxygen, which we can't store in our bodies. It is also needed to get rid of the lactic acid that may build up, this is known as oxygen debt. The ATP provides energy for the muscle during ATP hydrolysis. ATP is also used in active transport. Active transport is the movement of particles across a membrane against the concentration gradient and is vital in regulating the concentrations of molecules in a cell, this requires energy, unlike passive transport which doesn't. ATP-ase is an enzyme required in active transport. An example of active transport is sodium potassium pumps, sodium ions get pumped out of a cell against the gradient, whilst potassium ions get pumped in. All ATP-powered pumps have one or more binding sites for ATP, and these are always on the cytosilic (inside) face of the membrane. Although these proteins are often called ATP-ases, they normally do not hydrolyze ATP into ADP unless ions or other molecules are simultaneously transported. ...read more.

ATP is also used to keep us warm, it is what helps us remain in homeostasis. When ATP is made during respiration only about 40% of the energy from glucose goes into the ATP, the rest is released as heat, this is known as an endothermic reaction. That's why when your cold you shiver, by moving your muscles you're using up ATP and by doing that the mitochondria will produce more, and with it heat. ATP has many more uses including repair and maintenance of cells, DNA replication, Cell division and synthesis of other products. The roles and uses of ATP are endless and it plays a part in every second of our life, but not only our life but every living thing, from the smallest bacterium, simple plants to complex animals. Simplified it is a rechargeable battery but it is used to carry out many complex functions and mechanisms in our body, as well as being quite complex to create. It's a quick to use energy source found in every cell in our body, being a much more manageable form of getting little packets of energy, which it can give up in one reaction. Lewis Wade ...read more.

The basic building blocks of a nice essay are here, but this could be much better.
The student spends a lot of time discussing ways in which ATP is used. Including biological examples is really important, but here the student has spent too much time on things not on the syllabus, and missed out some important points that he could have discussed. (E.g. with respect to the muscles, he could talk about the role of myosin and actin in the muscle fibres). He could also include more detail about active transport in the neurones.
The essay contains no mention of ATP as a signalling molecule (and the role of cyclic AMP in glycogen metabolism). These things are on the syllabus, so should be mentioned preferentially if space / time is an issue.
This *** essay could be improved by:
1. Writing more clearly in shorter sentences to make it easier to read.
2. Including definitions of technical terms.
3. Using references for the biological aspects and also the diagram.
4. Providing more detail in the sections that come from the syllabus.