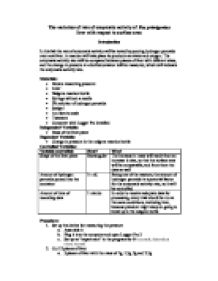 The variation of rate of enzymatic activity of Bos primigenius liver with respect to surface area Introduction In this lab the rate of enzymatic activity will be tested by pouring hydrogen peroxide over cow liver. A reaction will take place its products are water and oxygen. The enzymatic activity rate will be compared between pieces of liver with different sizes, and the change in pressure in a bottle/container will be measured, which will indicate the enzymatic activity rate. Materials: * Device measuring pressure * Liver * Nalgene reaction bottle * Syringe without a needle * 3% solution of hydrogen peroxide * Scalpel * An electric scale * Tweezers * Computer with Logger Pro installed Independent Variable: * Mass of the liver piece Dependent Variable: * Change in pressure in the nalgene reaction bottle Controlled Variables: Variable controlled: How? Why? Shape of the liver piece Rectangular The increase in mass will result from an increase in size, so that the surface ...read more.

Put a piece of liver into the pyramid-like tube 4. Load the syringe with 15 mL of hydrogen peroxide 5. Press "start experiment" in LogoPro and pour the hydrogen peroxide into the nalgene reaction bottle and cover it with the device measuring pressure 6. Wait until the computer program finishes recording data 7. Save the data on the computer 8. Clean the tube 9. Repeat steps 3-8 with all of the liver pieces Safety gear: * Goggles Data Collection and Processing Graph #1. 1g cow liver pieces X-axis - time (s). Y-axis - pressure (kPa) In every trial, there was a drop in the beginning, followed by a steady raise in pressure. Trial #2 and #3 were very similar, even though #3 had a bigger drop in pressure in the beginning. Average ending pressure was 92.61 kPa. Graph #2. 1.5g liver pieces X-axis - time (s). ...read more.

* Liver pieces were not similar enough in shape. Some were thinner and longer, while other were thicker and shorter, resulting in different surface areas and therefore uncertainty in data. * The measuring device was not of 100% precision and accuracy. It sometimes recorded the same amount of pressure for 2-4 seconds, and the starting pressure was not always the same. * The speed of pouring in the H2O2 was not the same, resulting into some data having large spikes in the beginning of the trial * Timing between trials of starting recording and pouring in the H2O2 was not same. This could have affected the data received, because the trials had different reaction times Conclusion A raise in pressure and difference in data between treatments proves that this method is viable and can be used for such types of experiments. The data suggests that an increase in surface area results in greater enzymatic activity. However, the amount of errors prevented a solid confirmation. These errors introduced uncertainties, which greatly affected the data. ...read more.