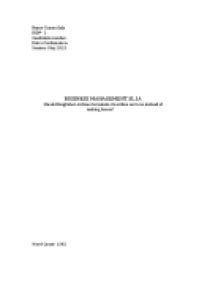 ﻿Name- Karan Gala IBDP- 2 Candidate number- Date of submission- Session- May 2013 BUSINESS MANAGEMENT SL IA Should Kingfisher Airlines terminate its airline services instead of making losses? Word Count- 1382 ________________ Introduction Kingfisher Airlines is an Indian based airline, owned by Vijay Malaya, operates both domestics and international flights. It is India?s largest airline company with over 144,000 international passengers in a year and over 5.4 million domestic passengers within 6 months in 2009 and has a fleet of 74 aircrafts and operation almost about 400 flights daily. It had also been awarded as the best airline in India for the year 2011. But due to certain difficulties, it has been making huge losses since last few years. Many of the supporting documents such as the P&L accounts, share prices, Gross prices, etc. along with the secondary data are discussed. It will also include some of the business analytical tool for evaluating the cause. At the end, a conclusion will be drawn on the issue worked upon in the assessment of the project. ________________ SWOT Analysis Strength 1. Good brand image and reputation among all Indian airlines. 2. Quality services with more than 80 destinations. 3. Less than 100 crew and employees per aircraft. ...read more.

2. Different people from different income groups have to be catered. Technological Factors 1. Use of online booking and customer service and responding to their queries and complains and updating flight information regularly. 2. Reengineering the existing airports and aircrafts for creating a world-class appeal. Other than the strengths, weaknesses, or threats, these mentioned factors also play an important role in determining their overall stand. In this case, Kingfisher airlines have spent most of its income for providing high-class amenities to their customers. But this can pose problems for the firm during bad economic conditioned along with other political factors affecting the working of the airlines. During recession, when the cost of tickets rise along with other services that they provide, customers usually seek for comparatively cheap airline ticketing costs. Kingfisher on the same, have gone imprecise. Some of these factors have caused huge losses for kingfisher airlines since its initiation. Porter?s Five-Force Analysis 1. Apart from internal factors, there are other external influencing factors that may cause a hindrance for the firm. Competitors may pose problems for the existing firm as their market value may reduce compared to their competitors. Demands of the suppliers have to be met as they provide services to the firm such as production of food, packing, transport, etc. ...read more.

The owner of the airlines, Vijay Malaya, had ordered a total of 92 airbus fleet many of which were supposed to be delivered till 2012 and 2013, but looking at his current situation with a total of 16 flights, it can be inferred that he might cancel the orders because since the company is already in losses, it won?t be able to pay for the new flight pre-ordered a fall into a new mess. Conclusion It would be better if Kingfisher Airlines shuts down in order to disregard the losses it has been making since the beginning. The company could either terminate its airline services or could either use a different management tool to make its operations more efficient and retain back their profits. They would also require a different organizational structure to be setup in order to function better. If the same trend goes on, problems with the pilots, crew members and other staff?s salaries that have not been paid for the last few months, can become worst. Even it was very hasty on the CMD?s point of view of providing airline services internationally with 2 years of startups. So, basically the whole airline services firm is on a verge of termination because of the problems mentioned. It would be a wise decision if the firm shuts down instead of making losses and creating further problems. ...read more.