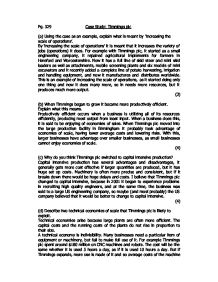 Pg. 529 Case Study: Timmings plc (a) Using the case as an example, explain what is meant by 'increasing the scale of operations'. By 'increasing the scale of operations' it is meant that it increases the variety of jobs (operations) it does. For example with Timmings plc, it started as a small engineering company, it repaired agricultural implements for farmers in Hereford and Worcestershire. Now it has a full line of skid steer and mini skid loaders as well as attachments, mobile screening plants and six models of mini excavators and it recently added a complete line of potato harvesting, irrigation and handling equipment, and now it manufactures and distributes worldwide. This is an example of increasing the scale of operations, as it started doing only one thing and now it does many more, so in needs more resources, but it produces much more output. ...read more.

Machinery is often more precise and consistent, but if it breaks down there would be huge delays and costs. I believe that Timmings plc changed to capital intensive, because in 2001 it began to experience problems in recruiting high quality engineers, and at the same time, the business was sold to a large US engineering company, so maybe (and most probably) the US company believed that it would be better to change to capital intensive. (4) (d) Describe two technical economies of scale that Timmings plc is likely to exploit. Technical economies arise because large plants are often more efficient. The capital costs and the running costs of the plants do not rise in proportion to their size. ...read more.

In 2001 Timmings plc changed to capital intensive production and spent $180 million on CNC machines and robots (as it already had difficulties recruiting high quality engineers). Two categories of robots were purchased by Timmings. Processing operation robots and assembly line robots. Some of the advantages of capital intensive production are that they are generally more cost effective if large quantities are produced, machinery is often more precise and consistent, its easier to manage than people and it can operate 24/7. This is good, as people are difficult to manage and cannot work without breaks and holidays. They need to be motivated to improve performance, and may go sick or leave suddenly. In my opinion the benefits of switching to capital intensive strategies outweigh the drawbacks; the only downside I can see is that 30 staff were laid off. (10) ...read more.