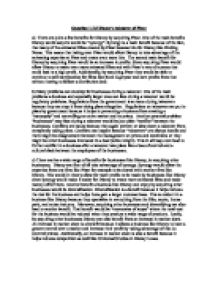 Question 1.7.5 Disney's takeover of Pixar a) There are quite a few benefits for Disney by acquiring Pixar. One of the main benefits Disney would acquire would be "synergy". Synergy is a main benefit because of the fact, that many of the animated films created by Pixar became hits for Disney like Finding Nemo. This means that taking over Pixar would allow Disney to take advantage of the animating expertise at Pixar and create even more hits. The second main benefit for Disney by acquiring Pixar would be an increase in profits. Since acquiring Pixar would allow Disney to make even more animated films and with Pixar's rate of success that could lead to a high profit. ...read more.

Another potential problem "businesses" may face during a takeover would be just plain "conflict" between the businesses. Conflicts are issues because they again prevent or slow down a takeover from completely taking place. Conflicts can happen because "takeovers" are always hostile and there might be disagreement between the management on prices and conditions or they might be other businesses interested in a deal (white knight). This in all may even lead to further conflict in a business after a takeover take place like a loss of control and a cultural clash between the employees of the businesses. c) There can be a wide range of benefits for businesses like Disney, in acquiring other businesses. ...read more.

This is evident in a business like Disney because they specialize in everything from the film, music, theme park, and cruise industry. Moreover, acquiring other businesses and diversifying can also lead to another benefit. That benefit would be "economies of scope" where the total cost for the business would be reduced when they produce a wide range of products. Lastly, by acquiring other businesses Disney can also benefit from an increase in market share. An increase in market share is a benefit because it allows a business like Disney to have a greater control over a market and increase their profit by taking advantage of that i.e. (control prices). Additionally, an increase in market share is also a benefit because it helps reduces competition as well like Universal Studios in Disney's case. ...read more.