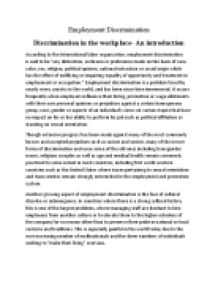 ﻿Employment Discrimination Discrimination in the workplace- An introduction According to the International labor organization, employment discrimination is said to be ?any distinction, exclusion or preference made on the basis of race, color, sex, religion, political opinion, national extraction or social origin which has the effect of nullifying or impairing equality of opportunity and treatment in employment or occupation.? Employment discrimination is a problem faced by nearly every country in the world, and has been since time immemorial. It occurs frequently when employers influence their hiring, promotion or wage allotments with their own personal opinions or prejudices against a certain homogenous group, race, gender or aspects of an individual?s views on various topics that have no impact on his or her ability to perform his job such as political affiliation or standing on sexual orientation. Though extensive progress has been made against many of the most commonly known and accepted prejudices such as racism and sexism, many of the newer forms of discrimination and even some of the old ones including transgender issues, religious scruples as well as age and medical health remain commonly practiced to some extent in most countries, including first world western countries such as the United States where issues pertaining to sexual orientation and transvestites remain strongly entrenched in the employment and promotion system. ...read more.

Laws against employment discrimination were enacted in Article 15, which prohibits discrimination on the grounds only of religion, race, caste, sex, place of birth, or any of them. This right can be enforced against the State as well as private individuals, with regard to free access to places of public entertainment or places of public resort maintained partly or wholly out of State funds and Article 16, which guarantees equality of opportunity in matters of public employment and prevents the State from discriminating against anyone in matters of employment on the grounds, but once again only on account of religion, race, caste, sex, descent, place of birth, and place of residence. However, it is worthy of note that there are no precedents in the Indian constitution for many of the newer forms of discrimination such as sexual orientation (homosexuality was banned in India until recently), transvestitism and age as well as medical health or physical appearance (disabilities). It may be beneficial for the constitution to be amended to include articles pertaining to these newer forms of workplace discrimination that have pervaded not only India, but the majority of civilized nations in the world. ...read more.

General secretary Brendan Barber said employers should fully use older staff, while the government should give older workers a choice about how and when they retire. Ageist practices may also adversely affect youngsters, where younger applicants are passed over due to their employers prejudice against youth, who are unfairly deemed to be unreliable and inexperienced despite their oftentimes impressive mental faculties. Many nations have laws against ageism such as the Age Discrimination in Employment Act (ADEA), which prohibits employment discrimination against individuals who are 40 years of age or older in the USA, but no laws against ageism currently exist in India. Conclusion It is evident that forms of discrimination in workplaces throughout the world have always existed, and old discriminatory ideas are morphing into newer issues such as transgender and sexual orientation controversies, ageist practices and medical health based discrimination. Possible solutions include the passing of new laws and edicts, however a fundamental aspect of education needs to be changed or preserved to make sure every individual and future company ?boss? or managing staff member is provided with an extremely open minded and universal education without any traditional forms of bigotry. This issue can only end with the mending of cultural, social or other kinds of dislike for specific homogenous groups, genders or other kinds of people. ...read more.