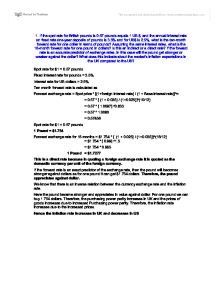 Finance and business questions and answers.

Adam Smith has proposed the theory of absolute advantage, according to the above table country A has absolute advantage in producing manufacture, so it exports manufacture. What is the amount it could supply? If country A produces all Machine, it requires 5280 food. and the price of 1 food in Country B is 0.71 Machine. So Country A to get 5280 Food it trades with (0.71 x 5280) Manufacture that is 3748.8 manufacture 6. Companies can be hurt by rapid changes in exchange rates even if they initially appear low cost compared to foreign competitors. Explain how STMicro reflects this situation and what it did to manage any future impact of exchange rates on its business. STMicro is the sixth largest manufacturer in semiconductor in the world. They produce a wide range of computer chip, printer chips, and car chips. Initially they started off manufacturing in Europe and at that time the currency exchange was in their favor. Since the dollar was stronger then the Euro in the early 2000s (�1= $.083) the profit translated into healthy profits for STmicro. Operation cost which accounted for 70% of the companies cost were denominated in Euro while all it's semiconductor product was priced in U.S Dollar. But the company did not hedge when it came to foreign exchange and eventually the Euro became stronger then the dollar (�1= 1.30 in 2006) by over 50% it lost considerable amount of profit. To manage the situation CEO, Carlo Bozotti took 500 million out of operational cost and cut about 3,000 jobs in Europe while moving the manufacturing operation to Asia. In Asia they added 1500 jobs and paid a lot less for labor. Bozotti described this strategic move as "real hedging". In hindsight this allowed the company to move their production from Europe to Asia whenever it was beneficial for them according the exchange rates. 7. Explain how Timberland developed global supply chain problems and then used IT to solve them. ...read more.

Singapore has a per capita beef consumption of 71.1 kg with a population of around 4 million. Its urbanization rate is 100% which tops all countries and has a per capita GDP of $28,100. It has a highly developed market-based economy and is the 5th wealthiest country in the world in terms of GDP (PPP) per capita. It is the 3rd most expensive Asian city to live in so it falls in the market Ruth's Chris caters to. Lastly, rival Morton's has a restaurant there. 4. Hannah was focusing on franchising as his choice of entry. What other entry modes are there? What are the strengths and weaknesses associated with each mode of entry from Hannah's perspective? Other modes of entry include joint ventures (JV), licensing, exporting, and wholly owned subsidiaries (foreign direct investment). Only 3 of these are possible due to their industry - JV, FDI, and franchising. JVs help Hannah enter the market easier with local market knowledge and allies, less investment required, and more profit. JV's weaknesses are difficult to manage, distance from headquarters, greater risk than franchising, and insider knowledge lost. FDI's strengths include direct control over operations and brand and total profit, and its weaknesses are higher risk than other options, more commitment and resources and more difficult to manage. The last option franchising, the benefit's includes less risk for Hannah, steady income, and brand growth and the disadvantages are less control, less profits, and loss of intellectual property. 5. What are some actual internal and external challenges Hannah will face when opening his restaurants abroad? Hannah selects the beef-eating population. However, no concession made to regional taste for menu items. Even McDonalds changes its menu in other countries, so why is Ruth's Chris so afraid? More importantly, would the risk of jeopardizing their core competencies through menu alteration outweigh the potential profit, this is the biggest internal challenge for them. Outsourcing USDA prime beef has to be expensive. Shipping it halfway across the world in freezers seems almost extravagant and inefficient. Could Ruth's Chris evaluate local sourcing of their produce? It's very important to think upon. ...read more.